Chapter 1: A brief history of geo-heliocentrism

Perhaps I should start by reminding all readers about the definitions of the three principal configurations of our Solar System proposed (and relentlessly-debated) among astronomers throughout the centuries. I will do so in an extremely succint and simplified fashion: 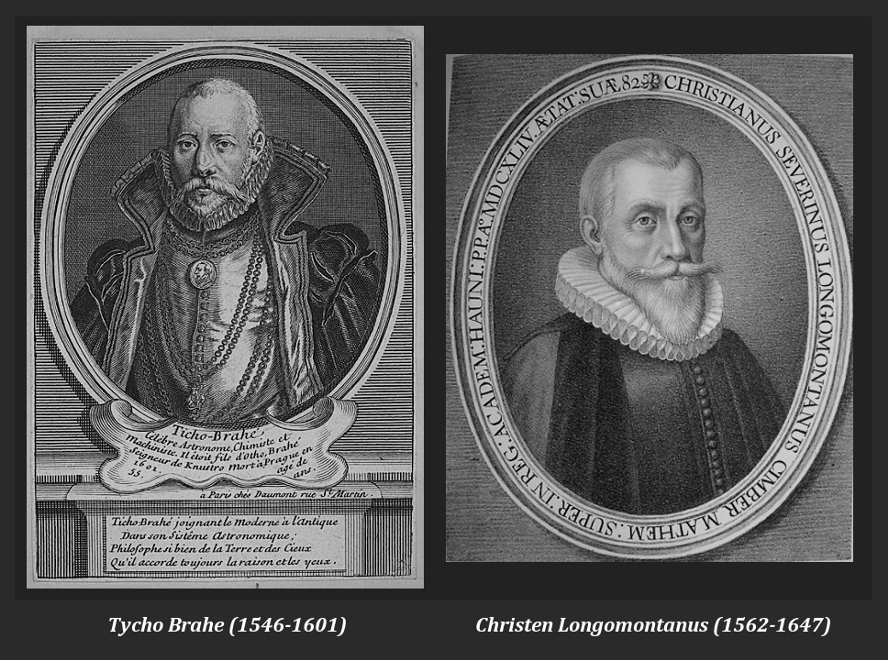 Tychos Brahe and his assistant Christen Longomontanus (author of the voluminous "Astronomia Danica").

In the mid-17th century, the Italian astronomer Giovanni Battista Riccioli was the most eminent supporter of the Tychonic system. In his main treatise, the 1500-page "Almagestum Novum" ("New Almagest"- 1651), he confronted and assessed the pros and cons of the three above-mentioned models in a fair and objective manner (as most historians will agree upon). The front cover artwork of his New Almagest shows how Riccioli eventually found the Tychonic model to be 'weightier' than the Copernican model: “The frontispiece to Riccioli’s Almagestrum Novum tells his perspective on the state of astronomy in 1651. Urania, the winged muse of astronomy, holds up a scale with two competing models, a sun-centered Copernican model, and the Tychonic geo-heliocentric model. Under God’s hand from the top of the image, the scale reports the Tychonic model to be heavier and thus the winner.” New Almagest

Interestingly, as we may read on Wikipedia, Giovanni Riccioli "is also widely known for discovering the first double star." (in 1650, i.e. about 50 years after Tycho Brahe's death in 1601). Today, however, astronomy literature credits William Herschel with the primacy of having definitively proven their existence - another 50 years later (around the year 1700). In any event, it is beyond dispute that no binary stars were observed before the advent of the telescope. So please note that Tycho Brahe was - in his time - wholly unaware of the very existence of binary stars.
Giovanni Riccioli

For most of his life, Tycho Brahe apparently believed that Earth was totally stationary, did not rotate around its axis - and that the stars all revolved around it in unison every 24 hours. One can only wonder how Brahe reconciled this belief with, for instance, the slow alternation of our polar stars (as well-documented throughout the ages). Eventually however, Brahe’s trusty assistant Longomontanus (in his Astronomia Danica, regarded as “Tycho’s testament”) allowed for Earth’s daily rotation around its axis in what became known as the “semi-Tychonic” system. To this day, the accuracy of Longomontanus’ refined version of his master's geo-heliocentric model has never been surpassed:

Longomontanus, Tycho’s sole disciple, assumed the responsibility and fulfilled both tasks in his voluminous ‘Astronomia Danica’ (1622). Regarded as the testament of Tycho, the work was eagerly received in seventeenth-century astronomical literature. But unlike Tycho’s, his geo-heliocentric model gave the Earth a daily rotation as in the models of Ursus and Roslin, and which is sometimes called the ‘semi-Tychonic’ system. […] Some historians of science claim Kepler’s 1627 ‘Rudolphine Tables’ based on Tycho Brahe’s observations were more accurate than any previous tables. But nobody has ever demonstrated they were more accurate than Longomontanus’s 1622 ‘Danish Astronomy’ tables, also based upon Tycho’s observations.

My proposed TYCHOS model is essentially a natural evolution of the semi-Tychonic system that further refines its unequaled consistency with empirical observation; it provides a long-overdue reassessment and completion of the extraordinary work of Tycho Brahe and Longomontanus which, sadly and inexplicably, was eclipsed by the emergence of the Copernican theory – in spite of its numerous problems and aberrations. As we shall see, these problems stem from the distinctly unphysical nature of its proposed heliocentric geometry. It is a poorly-known fact that the Copernican theory was (justly) rejected for several decades by the world's scientific community - due the many leaps of logic that its core tenets demanded. One of the most formidable mental efforts required (in order to accept the novel Copernican theory) was the extraordinary dimensions and distances that the stars would have in relation to our system. Another huge problem was, of course, the outrageous implication that our tranquil planet Earth would supposedly be hurtling around the Sun at the breakneck, hypersonic speed of 90X the speed of sound!

"Most scientists refused to accept [Copernicus’s] theory for many decades — even after Galileo made his epochal observations with his telescope. Their objections were not only theological. Observational evidence supported a competing cosmology,the “geo-heliocentrism” of Tycho Brahe. The most devastating argument against the Copernican universe was the star size problem. Rather than give up their theory in the face of seemingly incontrovertible physical evidence, Copernicans were forced to appeal to divine omnipotence."

— The Case Against Copernicus by Dennis Danielson and Christopher M. Graney

THE GEOHELIOCENTRIC MODELS OF TYCHO BRAHE AND PATHANI SAMANTA

Let us now compare the proposed geo-heliocentric models of arguably the two most proficient naked-eye observational astronomers of all times, Tycho Brahe and Pathani Samanta, both of which reached - independently of each other - practically identical conclusions with regards to the geometric configuration of our Solar System.

Below is a page that I scanned from a book titled "Indian Mathematics and Astronomy". The book was graciously given to me by its author (as I visited him in Bangalore, India, in April 2016); namely Prof. Balachandra Rao, a now-retired professor of mathematics, astronomy historian and author of several captivating books on ancient Indian astronomy. The page features an illustration of the planetary model designed by Pathani Samanta, a man rightly heralded as India’s greatest naked-eye astronomer: 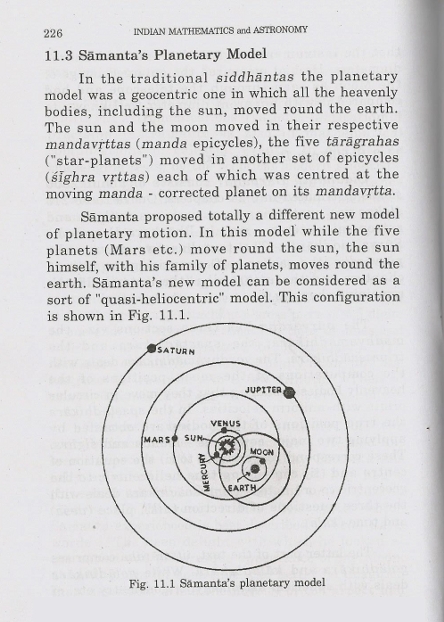 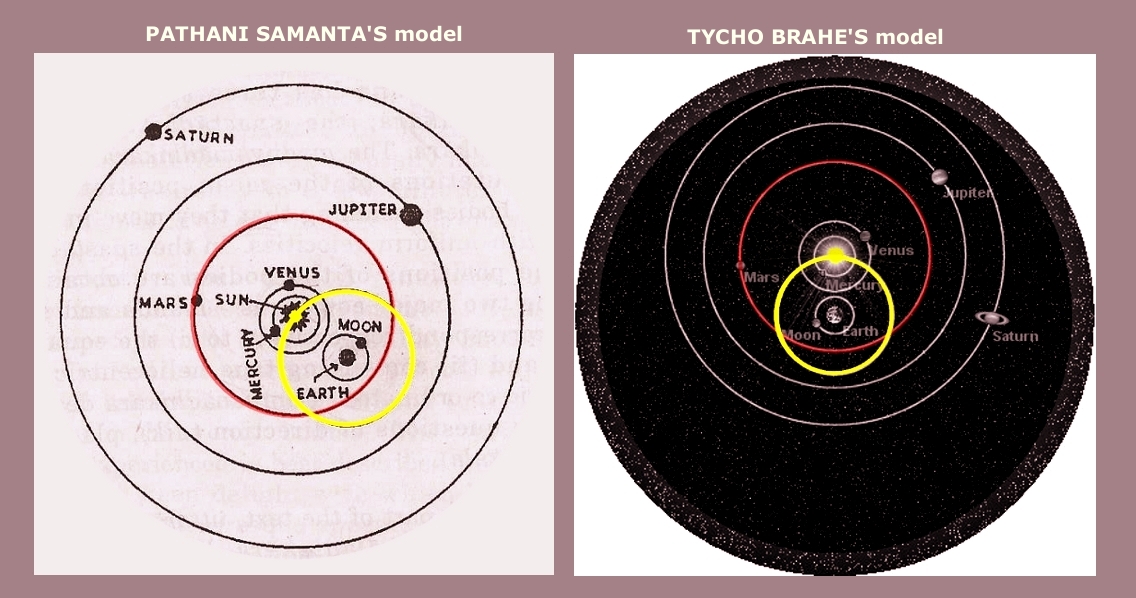 As you can see, the models of these two outstanding celestial observers are virtually identical. I have highlighted (in yellow and red) the intersecting orbits of the Sun and Mars which are clearly consistent with what we would call today a binary pair.

Since Tycho predated Pathani by more than two centuries, one might suspect some plagiarism on the part of the latter. However, it seems to be well-documented that Pathani Samanta (who published a monumental work in Sanskrit, the “Sidhanta Darpana”) reached his conclusions through his very own observations and ingenuity, working in semi-seclusion and with little or no contact with the Western world for most of his lifetime. I thus find it most unlikely that Samanta simply plagiarized Brahe’s work. Conversely, one could perhaps just as well suspect Brahe of having 'snatched' some ideas from another illustrious Indian astronomer / mathematician; namely, Nilakantha Somayaji (1444-1544) who predated Brahe by a century or so and who first devised a geo-heliocentric system in which all the planets - Mercury, Venus, Mars, Jupiter and Saturn - orbit the Sun, which in turn orbits the Earth. However, there can be no doubt as to the primacy of Brahe's massive body of astronomical observations - and their unprecedented accuracy. So let’s leave this at that, and instead ask ourselves a much more interesting and germane question raised by the above-illustrated, identical models of Tycho Brahe and Pathani Samanta:

“How and why did such diverse astronomers, after lifetimes of tireless observations, eventually reach such strikingly similar conclusions, particularly with regards to the intersecting orbits of the Sun and Mars?”

There is probably no easy answer to that question - and we can only marvel at the stunning similarity of their two models (something that, to my knowledge, has never been noticed nor discussed in astronomy literature to this day). Suffice to say that the fact that Pathani Samanta and Tycho Brahe are virtually unknown to the general public is nothing short of shocking. Try asking your entourage whether they have ever heard of Tycho Brahe and / or Pathani Samanta - and let me know how it goes!

Now, at a closer look (at the above illustrations of Brahe's and Samanta's models) there is something that intuitively appears to be missing. If you are game, please pause your reading for one minute and ask yourself: "What geometric figure (that should logically be there) is absent in both of the above planetary models?" Give it a good thought and continue reading when inspired to do so.

Well, here is what - in my view - constitutes a major 'logical weakness' in the above models: notice that the Moon, Mercury, Venus, Mars, Jupiter, Saturn and the Sun all have circular orbital paths drawn in the model. Only one celestial body is, exceptionally, lacking an orbit. That’s right: the Earth! Now, why would our planet not have an orbit and thus be motionless, unlike ALL the celestial bodies in our Universe? As I see it, the idea that the Earth – and the Earth only – would remain completely immobile in space is a most unfortunate failure of imagination. Nonetheless, the highest praise goes to these two prodigious astronomers of the pre-telescope era who provided us the most significant clue of all: namely, that the Sun and Mars are, in fact, “interlocked” in typical (intersecting) binary orbits, much like the vast majority - or quite possibly ALL - of our surrounding star systems.

Further on in this book, we shall see how the currently-accepted heliocentric model also presents a similar 'logical weakness'. Namely, the notion that our Sun would be the only star in our skies that lacks what I shall call a 'local orbit' (i.e. a relatively small orbit) of its own - unlike all the other stars in our cosmic neighborhood. If you once more pause your reading and give it a good thought, I trust you will sense the formidable absurdity of such a state of affairs. Indeed, to think that our Sun would be such an odd & unique 'exception to the rule' truly challenges our natural, innate common sense. Yes, the Sun is believed to have an orbit of its own (around our galaxy) - yet one that, according to current theory, requires some 240 MILLION years to be completed!

In the TYCHOS model, of course, the Sun has a small, 'local orbit' of its own - and it lasts for exactly one solar year. The Sun has a tiny binary companion which we all know by the name of 'Mars' (possibly a 'red dwarf' - by far the most common type of 'star' in our universe). Every 2 years or so (more precisely 2.13y), Mars and the Sun transit at diametrically opposite sides of the Earth: this is what we call 'the Mars oppositions' - which coincide with Mars's closest passages to Earth. Yet to this day, in spite of this peculiar behavior of Mars (reminiscent of the regular close encounters of binary stars), it has never occurred to anyone that we may live in a binary system! As I shall progressively expound and demonstrate in the following chapters, there is ample evidence for the Sun and Mars to be a binary pair. Along the way, my TYCHOS model will help elucidate and/or resolve a number of persistent conundrums, quandaries or outright mysteries of our visible universe - the 'pesky' existence of which no earnest astronomers or cosmologists can deny.

A fundamental point that the TYCHOS model will demonstrate is that our Solar System is a most perfectly stable 'clockwork'. Yet, modern astronomers are now suggesting that it is "chaotic"... Why, you may ask? Well - perhaps because they have never realized that the Earth has a (very slow) orbital motion of its own which, of course, will ever-so-slightly "perturbate" their mathematical calculations of the observed motions of our surrounding planets:

"SOLAR SYSTEM IS CHAOTIC (19 March 1999): Although the stability of planetary motion helped Newton to establish the laws of classical mechanics, new research on the positions of the outer planets suggest they are governed by chaos." "Solar System is Chaotic"

We shall now proceed and take a look at binary star systems. As of my personal experience, the vast majority of the general public is unaware (still today) of their very existence. And this, in spite of the fact that modern-day astronomers have known for years that the vast majority (or quite possibly 100%) of the stars in our sky have a binary companion (which is almost always invisible to our naked eyes - and very rarely visible in amateur telescopes).

In the next chapter, we shall take a close look at binary systems - the sort of which are being continuously discovered by modern astronomers.