This book is the result of almost a decade of steady research into ancient and modern astronomical literature, data and teachings. It all started as a personal quest to probe a number of issues and incongruities which, in my mind, afflicted Copernicus’ famed (and almost universally-accepted) heliocentric theory.

As I gradually came to realize that the Copernican / Keplerian model presented some truly insurmountable problems as to its proposed physics and geometry, I decided to put to the test, in methodical fashion, what was once its most formidable adversary, namely the geo-heliocentric Tychonic model devised by the great observational astronomer Tycho Brahe. In short, the essential soundness of Tycho’s original model led me to envision and formulate the missing pieces of his ingenious (yet 'unfinished') configuration of our solar system. If Brahe had been aware of what modern astronomers have learned in later decades, there is no doubt in my mind that he would have reached similar conclusions to those presented in this book.

The TYCHOS book expounds in simple narrative style – and with the visual support of more than 100 original illustrations – my revised design of Brahe’s system which, in absence of any other working model, should be ideally implemented in all branches of astronomy and astrophysics. This, because the TYCHOS is today the only existing model of our solar system which agrees – by and large – with the vast body of empirical astronomical observations aquired and documented by humankind throughout the centuries. In any event, as will be thoroughly expounded, the Copernican model is fundamentally flawed – and needs to be definitively discarded.

The TYCHOS model is based on, inspired by and built around both modern and time-honored astronomical data. Aside from Tycho Brahe's unequalled body of empirical observations, my work has relied and expanded upon a number of lesser-known, overlooked and neglected teachings who were unfortunately 'submerged' by the so-called Copernican Revolution. The early insightful architects who laid the groundwork for what should be our correct model for the Solar System include Nilakantha Somayaji (author of the Tantrasangraha, 1501), Samanta Candrasekhara Simha – (a.k.a. Pathani Samanta, 1835-1904), as well as the ancient Maya, Aztec, Sumerian, Greek, Arabic, Chinese - and even Native American astronomers. Instead, most people are currently worshipping a handful of 'European' science icons (e.g. Kepler, Galileo, Newton, Einstein), all of whom have been - in one way or another - accused of plagiarism, quackery - or outright fraud. Having said that, I do realize that my Tychos model is also primarily based upon the work of another 'European' astronomer - Tycho Brahe - yet nothing suggests that he ever engaged in anything else than meticulous observations of the motions of our Solar System's 'family members'.

Yet, in spite of Brahe’s rigorous and unchallenged documentation, his own model of the Solar System was ultimately flipped on its head by his young assistant, the now universally-acclaimed Johannes Kepler. Kepler used (and distorted) his master’s observations in his tortuous and tireless attempts to try and validate the diametrically-opposed Copernican model. One can only wonder why Kepler espoused and obsessively held on to, in his time, the then almost 100-year-old heliocentric theory of Copernicus (a man who never observed the motions of our planets in any detail - unlike Kepler's master, Tycho Brahe).

As very few people will know, Kepler was ultimately (in 1988) exposed for having manipulated Brahe’s all-important observational data (of Mars) so as to make them agree with his pet, heliocentric thesis. His legacy is therefore eminently questionable; Brahe had specifically entrusted him with resolving the baffling and bizarre behavior of this particular celestial body, and Kepler’s laws of planetary motion were almost exclusively derived ('mathemagically') from his relentless “war on Mars” (as he liked to call it in his correspondence with his friends and colleagues). Just why the Mars data presented such exceptional difficulties should become self-evident in the following pages.

Again, I trust that any earnest astronomer will concede that the currently-accepted Copernican model is by no means flawless. It is afflicted by a number of unresolved riddles, anomalies and incongruities. The persistence of several longstanding enigmas are clearly admitted throughout the more honest and candid sort of astronomy literature. It is thus a widely-diffused, popular misconception that the Copernican model has provided mankind with the most indisputable interpretation of the formidable wealth of astronomical observations gathered throughout the ages. As we shall see, the Copernican model is not only dubious or disputable: it is outright impossible - geometrically speaking.

In short, the TYCHOS provides the “missing pieces” which prevented Tycho Brahe from completing the puzzle of his geo-heliocentric system, in spite of the basic soundness of its geometric design. The TYCHOS model, while stopping far short of proposing a TOE (“Theory of Everything”), submits nonetheless what may be the most exacting, logical and intuitively sound geometric configuration of our local cosmos ever devised. As I discovered, following the reason of the data itself resolves a series of cosmological paradoxes that falsify the currently-adopted Copernican theory of our universe. It is an unfortunate characteristic of their present proponents to be recalcitrant towards and dismissive of data that they’ve failed to incorporate into a holistic self-consistency.

To ease explanations, I have done my best to employ simple graphics. I have also strived to use the simplest possible maths at all times, so as to make this text accessible to the widest possible readership range, including myself: I have always found complex equations both tedious and laborious. Fortunately, the core principles of the TYCHOS model can be expressed and outlined with a bare minimum of computations - all in the good tradition of Tycho Brahe’s very own philosophy. Here's one of Tycho Brahe's most famous quotes:

"So Mathematical Truth prefers simple words since the language of Truth is itself simple."

The TYCHOS is built upon the unchallenged raw data collection of thousands of years of human study of the stars and planets. Hence, my research efforts may simply be viewed as the natural completion of Brahe's work - enabled by a number of modern astronomical discoveries. It is the result of a fresh re-interpretation of ancient and modern astronomical knowledge, as well as a few lucky hunches of my own. I will kindly ask this world’s scientific community and all free-thinking people of integrity to carefully assess its principles with an open mind, devoid of prejudice and preconceptions.

As I dived into this cosmic research odyssey in late 2012 (driven by sheer curiosity and a keen penchant for intellectual inquiry) I had no way to expect, even in my wildest imagination, that I would reach any tangible conclusions worthy of your time. Yet, it now appears (to my pleasant surprise) that I was wrong about that. My best guess is that some lucky star has helped me along - in what has certainly been the most enthralling discovery journey of my lifetime.

“Now today we have a very remarkable fact, my dear friends. This Copernican system, when employed purely mathematically, supplies the necessary calculations concerning the observed phenomena as well as and no better than any of the earlier ones. The eclipses of the Sun and Moon can be calculated with the ancient Chaldean system, with the Egyptian, with the Tychonian and with the Copernican. The outer occurrences in the Heavens, in so far as they relate to mechanics or mathematics, can thus be foretold. One system is as well suited as another. It is only that the simplest thought-pictures arise with the Copernican system. But the strange thing is that in practical Astronomy, calculations are not made with the Copernican system. Curiously enough, in practical Astronomy, — to obtain what is needed for the calendar,- the system of Tycho Brahe is used! This shows how little that is really fundamental, how little of the essential nature of things, comes into question when the Universe is thus pictured in purely mathematical curves or in terms of mechanical forces.”

Evidently, Steiner’s acumen, clairvoyance and intellectual honesty were admirable in this subject. This is more than can be said about many of our modern-day men and women of science (in particular those in the fields of astronomy & cosmology) who oft refuse to consider new ideas which may challenge their long-established beliefs. The process of discovery requires, of course, the very opposite intellectual attitude. I apologize to those entrenched in their application of principles they have only inherited from other minds - for any embarrassment (or even distress) that the TYCHOS might cause. However, I earnestly propose that it is now high time to think differently. Many important new discoveries have, in later decades, severely imperilled the very foundational precepts of the heliocentric theory of our cosmos (as upheld by Copernicus, Kepler, Galileo, Newton, Einstein et al). The failure to act upon these modern findings casts a shadow over the credibility of our world’s scientific community - as a whole.

THANKS FOR YOUR KIND SUPPORT#

This new, 2nd Edition of my TYCHOS book is now freely accessible online – in the interest of maximum divulgation (monetizing this research has never been a priority). However, we will warmly appreciate any financial support towards my - and Patrik Holmqvist's - ongoing research which we will pursue, develop and diffuse for the remainder of our lifetimes! Rest assured that all donations will be used exclusively for this purpose.

Here's where you will find the DONATE BUTTON

At the time of writing (March 2022), the 2nd Edition of the TYCHOS book is not yet available in physical form. Please return to this web page which will be updated as soon as we will have finalized agreements with suitable publishers and distributors. If you are a publisher, feel free to contact us for enquiries.

Meanwhile, here is where you may purchase the ORIGINAL 1st edition of my book, “The TYCHOS - Our Geoaxial Binary System” (2018) in physical form. 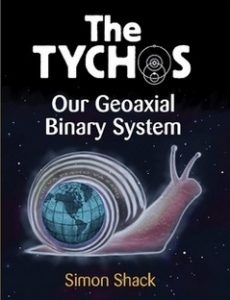 Thank you – and enjoy your newfound cosmic perspective. Consider it, if you will, as a boon empowering your intellectual awareness during your own life-passage on this planet. It may well take many years (or decades?) before the TYCHOS model will be acknowledged, discussed, let alone accepted by this world’s scientific community. However, I trust that the soundness and logic of its principles will ultimately shine through - no matter what obstacles it may encounter.