Chapter 21: A Man's Yearly Path - and the Analemma

In the TYCHOS, Earth proceeds at 1.6km/h(or ≈1mph), covering an annual distance of ca. 14036km. You will note that this distance is just a little longer (by 1280km) than Earth's own diameter of 12756km. Since Earth also spins around its axis every 24 hours or so, it follows that the path traced by a man (standing still for a full year) will be a trochoid. A trochoid is simply a curve traced by a point fixed to a circle as it rolls along a straight line. So if we imagine a stationary man in London (let's call him "Jim") looking through his telescope for a full year, our Jim will be carried around a trochoidal path (Jim is patiently monitoring the annual motions of the star Vega). 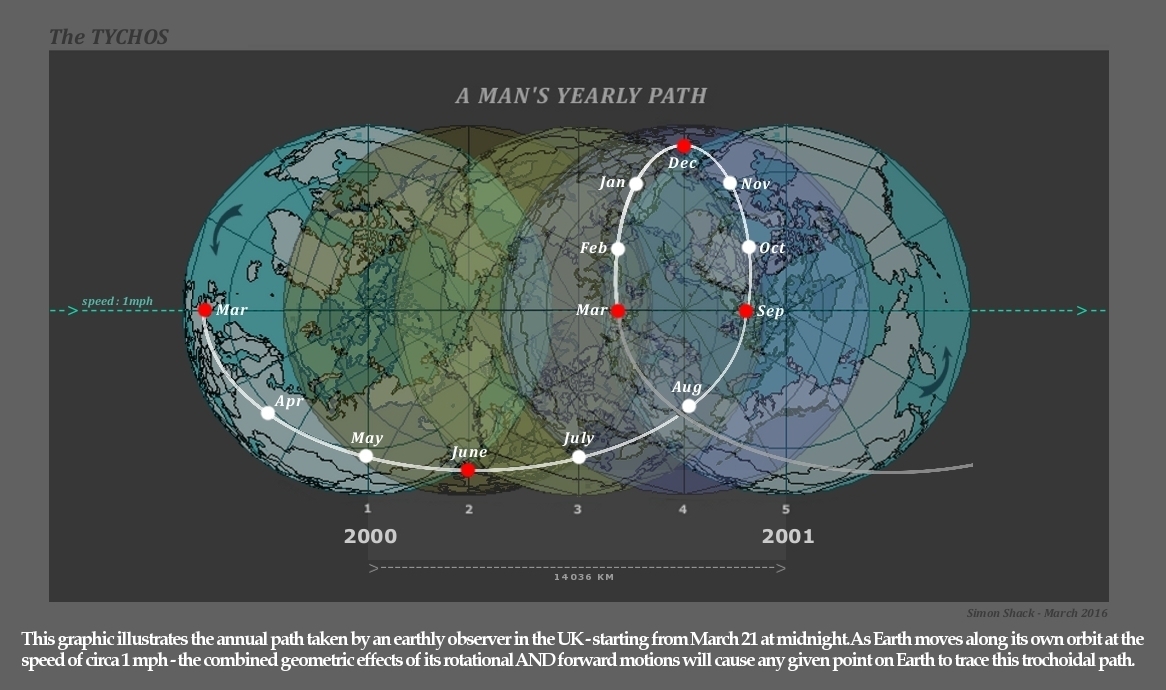 Of course, unless Jim is aware of his own trochoidal motion (i.e. his continuously 'looping frame of reference"), he will be baffled and stupefied at star Vega's seemingly 'inexplicable' behavior: as Jim records (over a full year) the successive positions of star Vega on a fixed photographic plate (which, of course, will gyrate in the same manner as himself, i.e. around a trochoidal path), the annual motion of star Vega will appear to trace a peculiar geometric curve known as a 'prolate trochoid':

Note that the shapes (or 'heights') of these stellar trochoidal paths will vary depending on the celestial latitude of any given star. However, in the case of a star located along the Earth's equatorial ecliptic, that star will NOT exhibit any visible trochoidal curve; instead, it will just proceed along a straight line - while periodically retrograding (i.e.reversing direction) whenever Jim, our astronomer, is briefly 'carried backwards'(in relation to the Earth's motion) - as shown in my above graphic.

Here is a modern diagram of the observed motions of the star Vega (over a 3-year period): 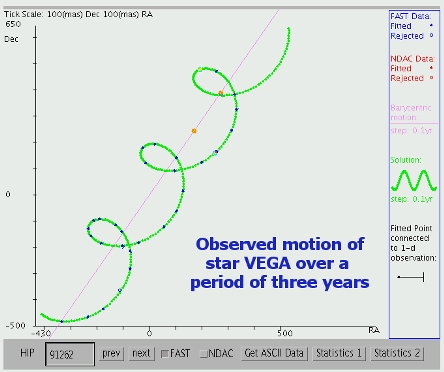 Our Jim then decides to monitor another star, then another - and then another. He finally realizes that ALL the stars in our sky exhibit trochoidal motions (or short retrograde periods)! Jim, who just isn't ready to abandon his long-nurtured convictions, may then come up with all sorts of ad hoc theories to 'explain the unexplainable'. This was, in fact, precisely the case with Astronomer Royal James Bradley who famously monitored the star Draconis for extended periods of time and, having later noticed that ALL the stars actually exhibit similar annual trochoidal paths, went on to formulate an abstruse theory that he named "Stellar Aberration" - or "the Aberration of Light". But more about that later.

The below image is from an astronomy website. It shows that even our nearmost star, Proxima Centauri, is observed to proceed along a similar (albeit 'flatter') trochoidal path as Vega: 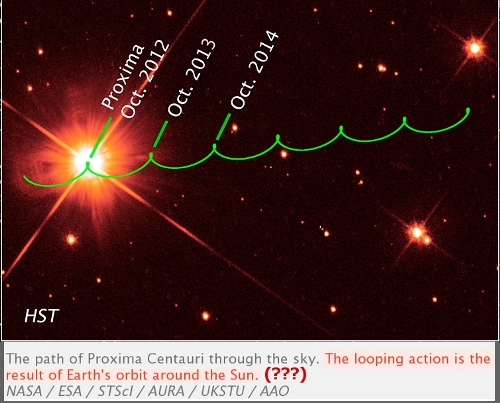 Source: Hunting for Planets Around Proxima Centauri - by David Dickinson / 2016

Note the bizarre, official explanation: “The looping action is the result of the Earth’s motion around the Sun”. (???). Pray tell... HOW exactly would THAT play out?

We shall now proceed to show how this annual trochoidal motion (of any earthly observer) can account for other still unexplained, or dubiously interpreted celestial phenomena. Perhaps the most curious of them all is the observed annual motion of the Sun – as it traces an elongated “8”-shaped pattern in our skies. This geometric pattern traced by the Sun is known as the “Analemma”.

THE ANALEMMA - a qualitative analysis#

Any patient photographer can empirically verify the existence of the Analemma by setting up a tripod and snapping pictures of the Sun at noon (say, every ten days or so) for a full year. What will be obtained is a vertically-elongated “8”-shaped curve (wider at the lower end) well-known to astronomers. In the past, the Analemma used to be printed on the pretty globes adorning people's living rooms. For some reason though, this is no longer the case. 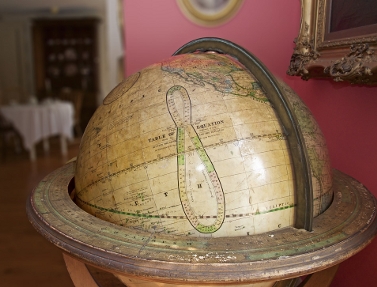 Everyone has heard of the proverbial broken clock “which will nonetheless show the correct time twice a day”. However, not everyone knows that our earthly clocks are, strictly speaking, almost never on time. In fact, our clocks only agree with the Sun’s midday zenith 4 times a year. The remaining part of the year, our clocks will drunkenly be slipping in-and-out of sync with the Sun by as many as +16 minutes or -14 minutes, depending on the season / time of year! 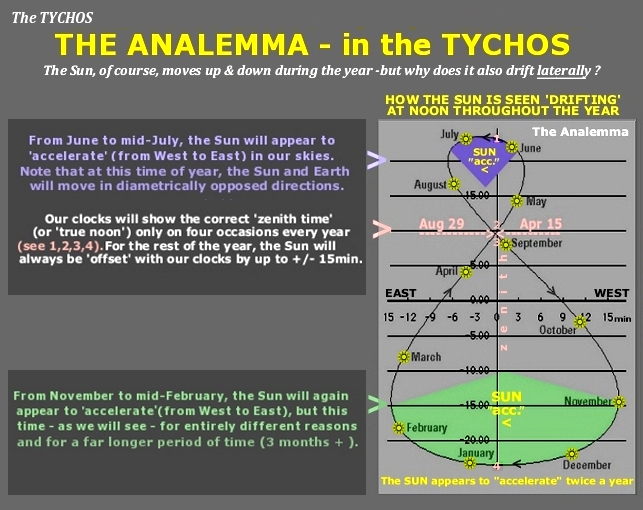 What exactly causes this curious analemma phenomenon? Of course, the vertical component (December-June) of the analemma is due to the Sun’s shifting elevation between winter and summer (23.4°X 2 = 46.8°) caused by Earth's 23.4°-degree axial tilt - so no mystery there.

On the other hand, the lateral component of the analemma (i.e. the alternating East/West drift of the Sun) has not, to this day, been adequately explained in any satisfactory manner. As Keplerian theory has it, it is caused by Earth "accelerating or decelerating around its slightly elliptical orbit”(*). This, we are told, would account for the Sun’s zenith to oscillate in our skies by more than 30 minutes. What sort of magical forces would cause Earth to speed up and slow down is unclear. Here on Earth, there is simply no such physical phenomenon to be observed in nature. Yet, this has somehow been accepted as a scientific fact in absence of any experimental corroboration.

(*)NOTE: In any event, this Keplerian theory is directly contradicted by the fact that the Sun's motion (or rather 'Earth's motion' - under the heliocentric paradigm) appears to accelerate in June & July, i.e. when Earth's velocity, according to Newton's laws, would be at its MINIMUM - as it transits at its furthest distance from the Sun.

Another curious aspect of the Analemma is its highly asymmetric 8-shape (thinner at the top and thicker at the bottom). Now, what could possibly cause this uneven 'distribution' of the Sun's annual East-West oscillation? Various theories have been advanced - yet none have definitively settled the question. However, as we consider a "Man's Yearly Path" (see above), we see that the trochoidal motion of an earthly observer (over a full year) has a lateral displacement ratio of 3:1. And in fact, the asymmetry of the Analemma also exhibits a similar 3:1 ratio; I trust that my below comparative diagram should instantly clarify this matter. (Also, the reader may now recall the 3:1 ratio of the Moon's trochoidal apsidal precession - as illustrated in Chapter 13). 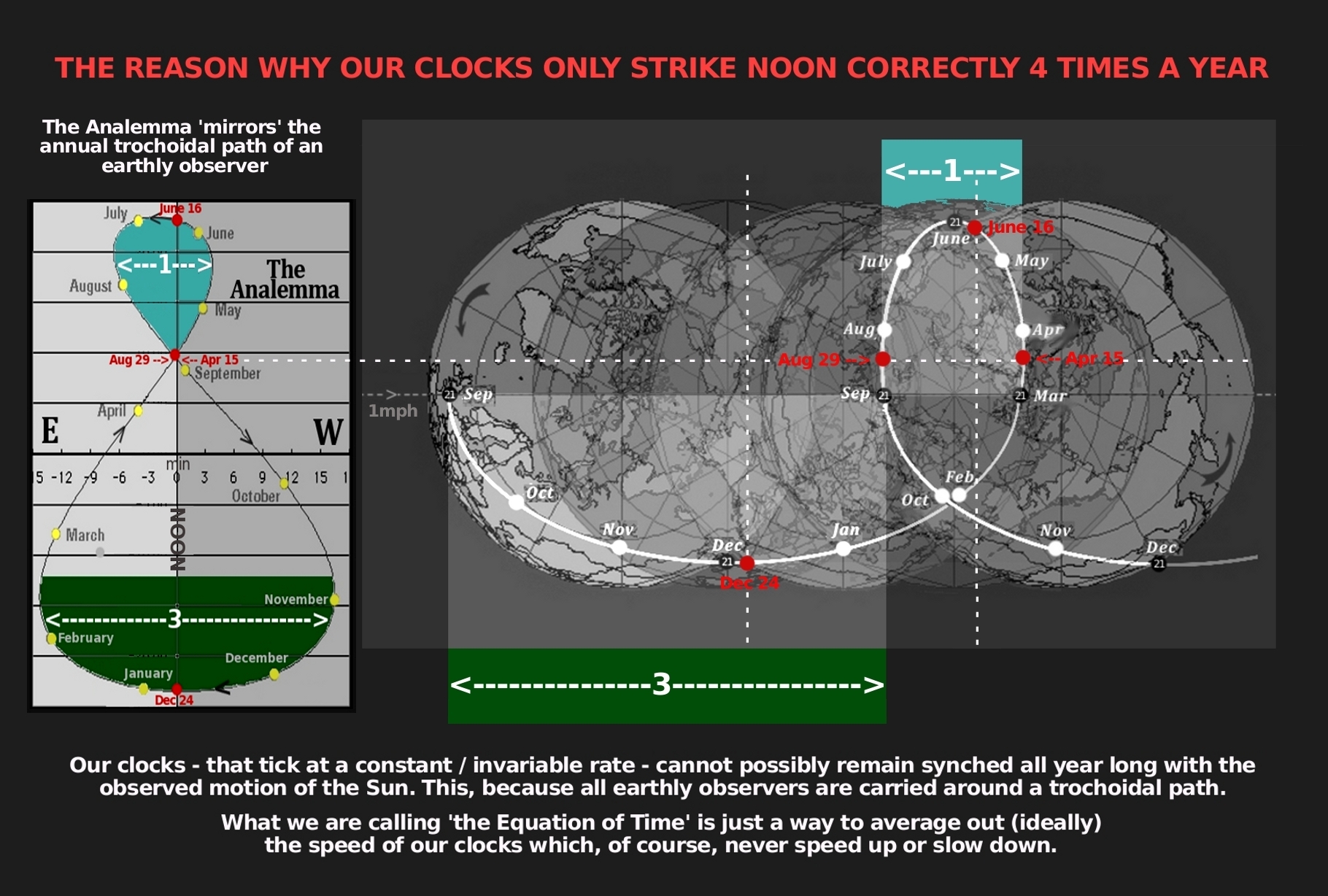 Note how the four occasions when our earthly clocks 'agree with the Sun" (i.e. June 16, Dec 24, Aug 29 and Apr 15) neatly 'coincide' with the observed Analemma - as shown in the two graphics compared above. At this point, it should be intuitively evident to the reader that the Analemma is - at least qualitatively speaking - closely related to what I like to call "a Man's Yearly Path". Let's now take a closer look at the maths involved - but don't worry: I will, as ever, keep my computations as simple as possible.

THE ANALEMMA - a quantitative analysis#

So let’s see: if our clocks, in the course of the year, can be “ahead” by about 16.5min and “behind” by about 14min, the total East-West offset of the Sun in relation to the true zenith would thus amount to 30.5 minutes. Now, how then can we possibly accurately measure time and calibrate our clocks (which, of course, tick at constant speed) with the solar motion if our celestial timekeeper (the Sun) keeps “accelerating and decelerating”? Well, we simply can't.

The so-called Equation of Time is a clever man-made convention devised to deal (to the best of our capacities) with this pesky lateral oscillation of the Sun. In fairness, the Equation of Time has provided an ingenious solution to this problem. Yet, the fact remains: our clocks, as useful as they are for our daily purposes, are cosmically-speaking almost always 'offset' in relation to the Sun.

Note that the total observed annual “lateral drift” of the Sun adds up to 30.5 min (16.5min + 14 min) of RA. However, this is without accounting for the fact that an extra 3.93 min. is added by convention - via the leap-year gimmick - every four years or so. To be precise, 3.76 min. are added (over longer periods of time - since some leap years are skipped). Therefore, 0.94min (¼ of 3.76 min) should be added to the annual count of the Sun’s lateral drift, giving us a total of: 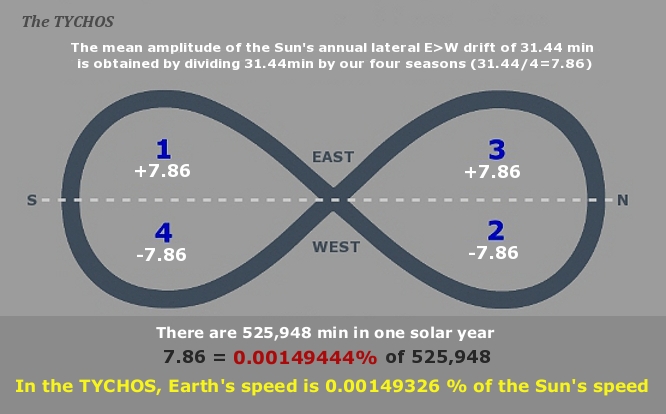 In conclusion, we may conceptually envision the Analemma as Earth's "speedometer" - since its mean rate of East-West oscillation reflects our planet's 1.6km/h orbital speed. In addition to this important realization, we may stipulate what follows:

In order to summarize this chapter - and hopefully further clarify some of its contents - I submit the following graphic: 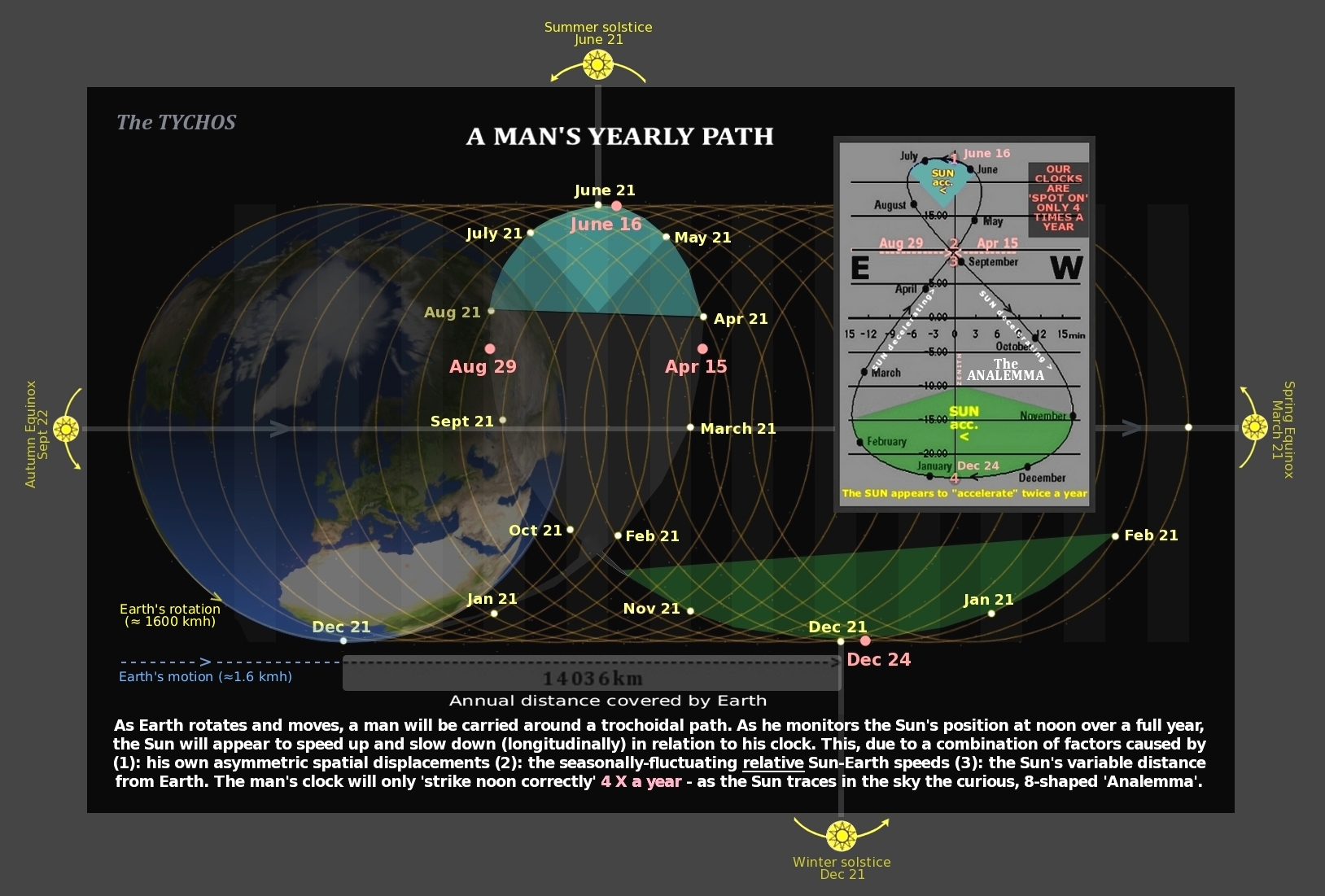 We now have a solid basis of evidence with which we can start to dismantle the heliocentric theory - once and for all. However, we first need to demonstrate - in methodical fashion - that some of our most celebrated scientists were all "at sea" as to the true geometric configuration of our Solar System. Yet, they are still hailed today for having "definitively proven that Earth revolves around the Sun" - in absence of any experimental evidence in support of this contention. Two names come to mind: James Bradley - and Albert Einstein. In the next chapter, we shall see how the strange theories of these "icons of science" were based on illusory observations, fallacious interpretations and - quite literally - on thin air.