The Sun and Mars are the main players of what I have called our 'geoaxial binary system'. At or near its barycenter, we find Earth and our Moon, while the Sun (escorted by its two moons, Mercury and Venus) and Mars (escorted by its own two moons, Phobos and Deimos) perform their binary dance around our planet. It is Earth’s physical motion around its “PVP” orbit that causes our North stars to change over time – a very slow process commonly-known as the “precession of the equinoxes”. 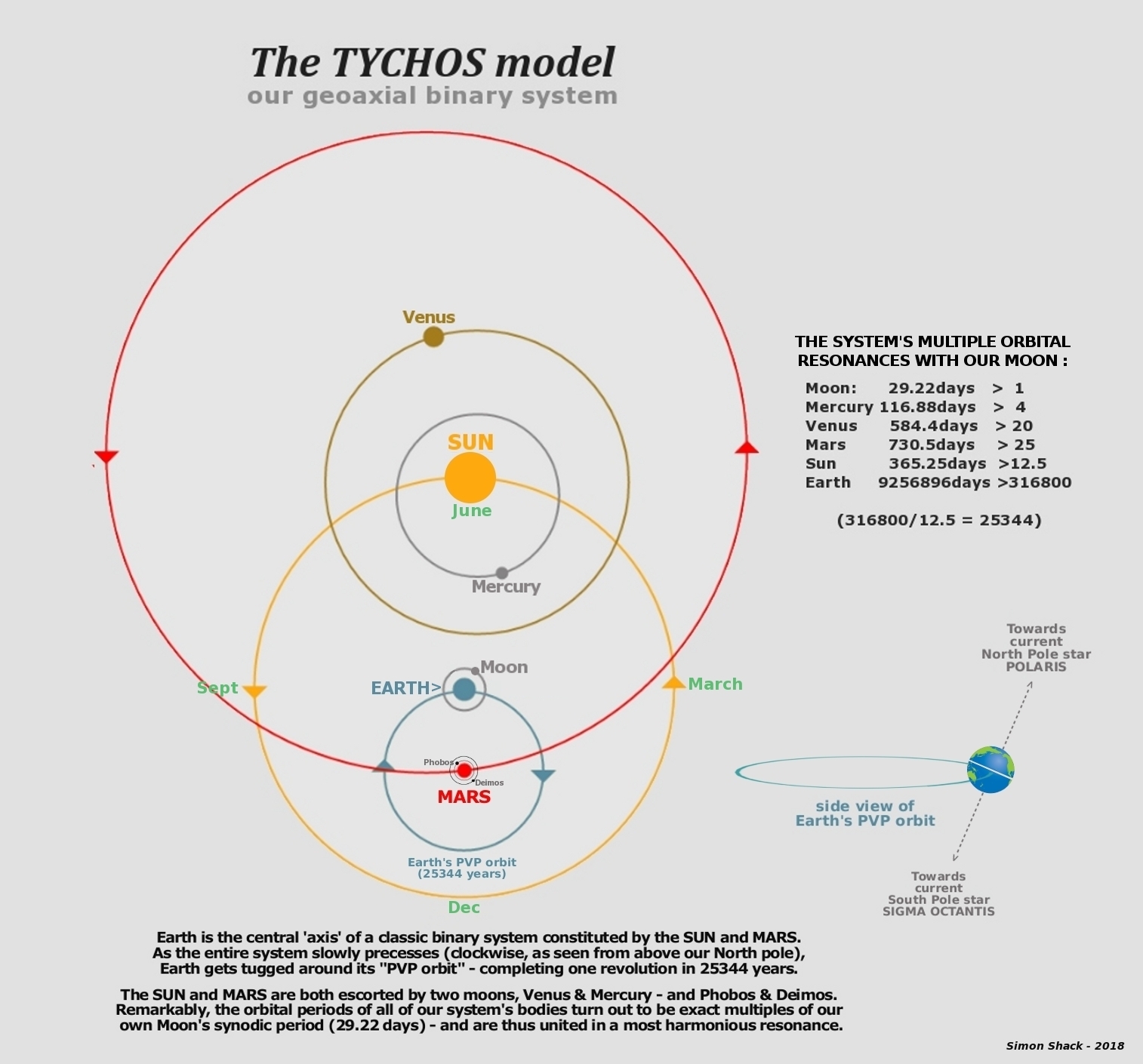 In the TYCHOS, Earth is inclined at about 23.4° in relation to its orbital plane - yet its Northern hemisphere remains tilted at all times ‘outwards’, i.e. towards the external circuit of the Sun. The Sun revolves once a year around Earth, traveling at 107226 km/h (i.e. the orbital speed attributed to Earth by current theory). Every 2.13 years, its binary companion - Mars - reconjuncts with the Sun at either side of Earth (in my above graphic we see Mars transiting in so-called 'opposition'). Therefore, Mars is not a third moon of the Sun (as some commentators have objected) since it is the only body in our cosmic neighborhood whose orbit makes it alternately transit in opposition to - or in conjunction with - the Sun. The only reason why Mars may seem problematic to reconcile with our pre-conceived notion of 'binary motions' is because its orbit isn't locked in a 1:1 ratio with the Sun - but rather at a 2:1 ratio. Hence, Mars will not return in opposition every year - but only every other year (or so).

Each year, Earth moves ('clockwise' - as seen for above our North Pole) by 14036 kilometers along its "PVP" orbit - i.e. slightly more than its own diameter of 12756km. This motion of Earth goes to explain - in the simplest possible manner - the observed annual 'backward' motion of our stars (commonly-known as "the Precession of the Equinoxes"). I will henceforth refer to this yearly 14036-km advancement of Earth as the "EAM" (Earth's Annual Motion).

There is thus no need for Earth to “wobble around its polar axis” (a.k.a. "Earth's 3d motion") as of Copernican theory; nor does Earth hurtle around space at hypersonic speeds. Earth only rotates around its axis once every 24 hours - at the extremely sluggish rate of 0.000694 rpm! - while it gently gets tugged around its orbital path at 1.6 km/h (about 1 mph) by our entire Solar System which, over time, precesses 'clockwise'(as viewed from above our North Pole). In such manner, Earth completes one revolution around the PVP orbit every 25344 years, a period also known as “The Great Year”. I submit that what I have called the “PVP” orbit (“Polaris-Vega-Polaris”) is the missing piece of the puzzle of Tycho Brahe's almost flawless geoheliocentric system. The PVP orbit will of course be thoroughly expounded and illustrated further on in this book, as it constitutes the core discovery upon which the TYCHOS model is founded.

It is essential to understand that, in the TYCHOS model, all of the planets and moons orbit at constant speeds around uniformly circular (albeit eccentric) orbits. In other words, there never was any need for Kepler's variable orbital speeds or for his proposed elliptical orbits - the latter being just an illusion caused by Earth's motion around its PVP orbit: to wit, since Earth slowly proceeds along an almost 'straight line' (over, say, 100 years) the Sun and our surrounding planets will appear to oscillate slightly back and forth; in the summer (of the Northern Hemisphere), the Sun will be moving in the opposite direction of Earth whereas, in the winter, it will move in the same direction as Earth. Thus, the illusion of 'elliptical orbits' is created - while other apparent speed variations are due to the fluctuating distances between Earth and the various bodies of our Solar System (since their circular orbits are all eccentric, which means to say that they are somewhat off-center in relation to Earth).

You may now ask the age-old question: "Orbital speeds? In relation to WHAT?" The short answer is: in relation to the 'fixed' stars. Now, the stars also have so-called 'proper motions' of their own. That is, they move a tiny weeny bit every year - in random directions - yet they do so by a microscopic amount (the typical proper motion of a star is ~0.1 arcsec/year). Hence, we should be satisfied that the star backdrop (a.k.a. "the firmament") constitutes a quite reliable, near-static reference frame against which we may compute the orbital speeds of the various bodies comprised in our Solar System - providing that we duly account for Earth's own orbital motion. What is empirically observed is that ALL the stars (i.e. our entire firmament) drift from west to east in our skies by about 50 arcseconds each year. In the TYCHOS model, this slow 25344-year revolution of our firmament is quite simply caused by Earth's tranquil 1-mph motion around its "PVP" orbit. 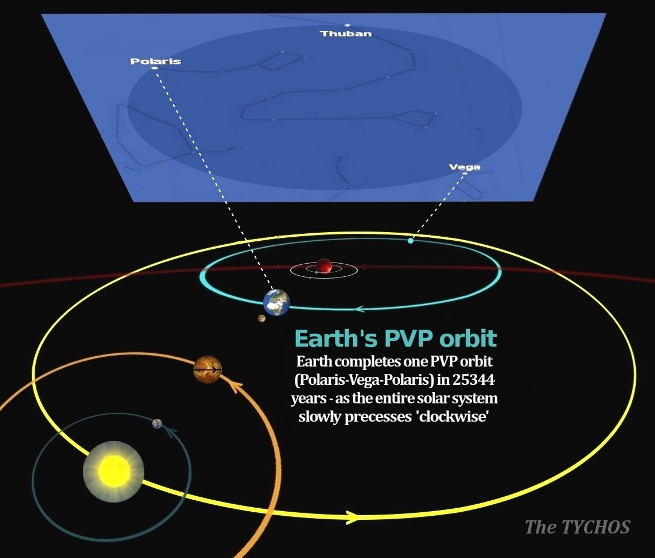 Let it be clear that the TYCHOS has rigorously respected the currently-accepted distances - as measured by Copernican / Keplerian astronomers - between the bodies comprised in our own solar system. This, because they have (correctly) been using as a baseline for their measurements the diameter of Earth of 12756km (a well-established measurement). However, their determination of the Earth->stars distances is an entirely different matter. This, because they have (incorrectly) used as a baseline the supposed diameter of Earth's alleged orbit around the Sun - of ca. 300 million kilometers. Since they are using as a baseline this non-existent "300 Mkm lateral six-month-displacement of Earth", all of their calculations of Earth-to-stars distances are sistematically flawed (i.e. grossly inflated). In the TYCHOS model, Earth only moves by 7018km every six months - instead of 300 000 000 km. This means that the stars are more than 42600X closer than currently believed - a notion that Tycho Brahe would undoubtedly have welcomed and supported. In any case, the notion that many stars (visible to our naked eyes) would be located several thousands light years away has to rank among the most bizarre ideas entertained by this world's scientific community.

As I timidly started my TYCHOS research back in 2013, I certainly had no ambition or pretense to build a digital planetarium that could remotely attain (let alone challenge) the accuracy of existing, heliocentric simulators of our Solar System. All my initial calculations for my imagined, fledgling model were done with 'pen and paper' - and with the aid of simple graphic editing programs. However, as my research progressed over the years, I started daydreaming of having some IT-wizard help me try and 'animate' my TYCHOS model on some interactive digital 3D platform, so as to "bring it to life". At the time of this writing (March 2022), I am happy to say that the wondrous Tychosium 3D simulator has already surpassed my wildest dreams and expectations. 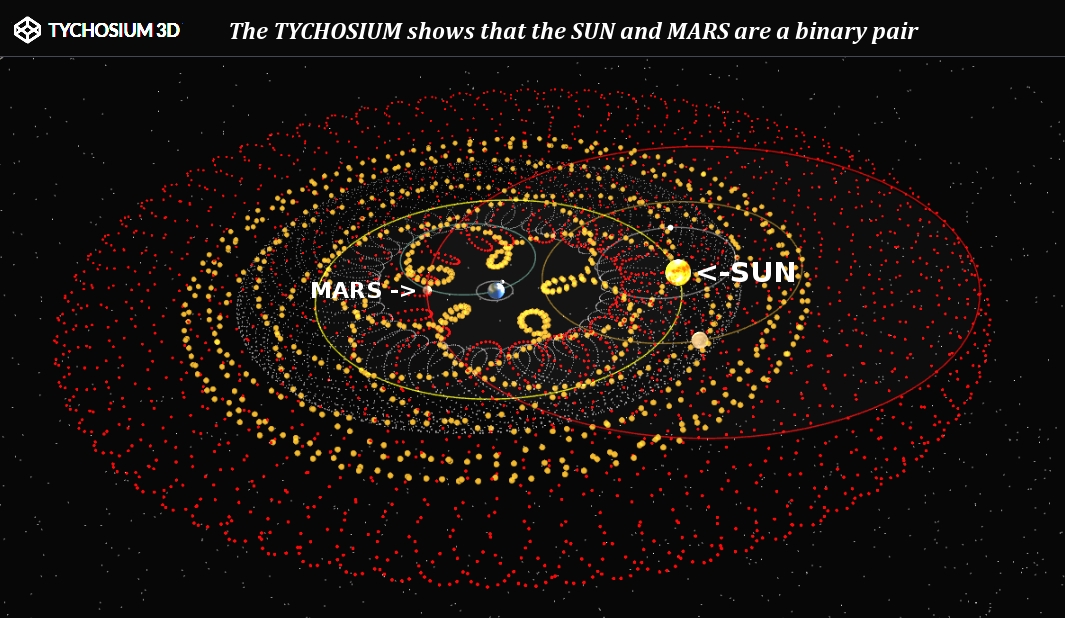 The Tychosium 3D simulator is a joint effort by yours truly and Patrik Holmqvist, a Swedish IT programmer I had the good fortune to meet in the summer of 2017. At the time of writing (January 2022), the Tychosium is still being developed and refined - yet we are both satisfied of its potential to become the most realistic and accurate digital simulator of our Solar System ever devised. The principal feature of its superior nature lies in the fact that it should (once refined and completed) correctly show the conjunctions of the bodies of our Solar System with the stars, without any geometric aberrations of parallax & perspective (such as those afflicting - and thus invalidating - the Copernican / heliocentric model).

I hereby vividly encourage all the readers (before proceeding) to open the Tychosium 3D simulator on their laptop computers and get familiar with its interactive functions. This is an essential requirement in order to fully visualize, assess and comprehend the workings of the TYCHOS model. 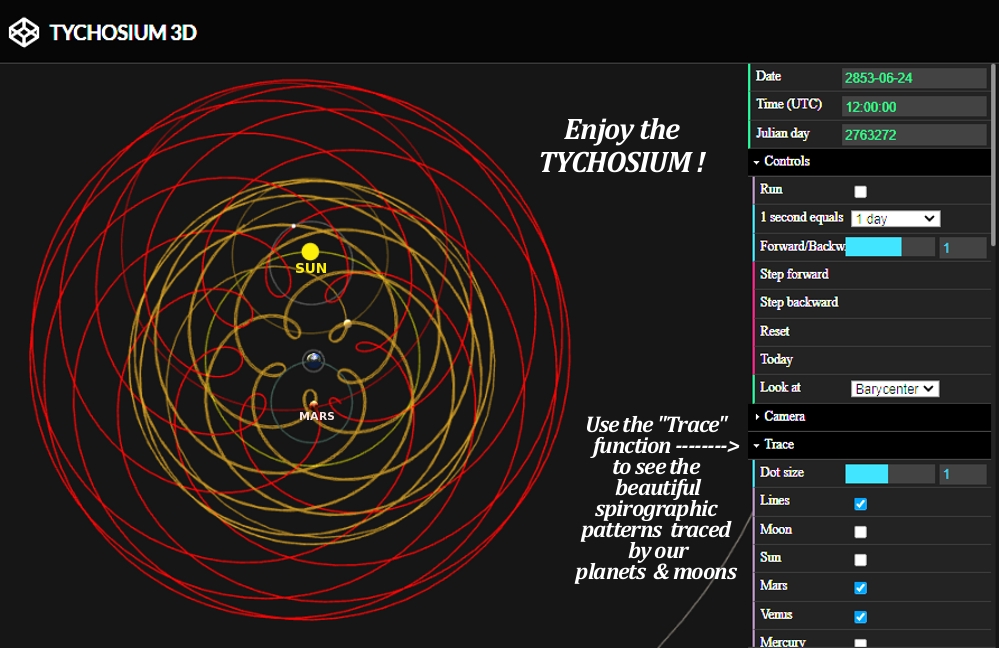 The Tychosium simulator is built upon the official astronomical tables compiled over the centuries by our world’s best astronomers. That is to say, all of the orbital sizes, relative distances and empirically verifiable sidereal periods within our Solar System have been rigorously respected. In the Tychosium, all the planets and moons revolve around uniformly circular orbits - and at constant orbital speeds. This is in stark contrast with the elliptical orbits and variable speeds that Kepler had to postulate in order to make the heliocentric model "agree" (mathematically) with empirical observations. In all logic, I have therefore used the mean/average values estimated for our planets’ orbital velocities - and disregarded their supposed “maximum” and “minimum” values, as computed by Kepler.

The Tychosium thus fulfills one of the most sought-after quests pursued by astronomers throughout the ages: to define a configuration of our Solar System which would be consistent with the (most natural) notion of our celestial bodies moving around uniformly circular orbits and at constant orbital speeds.

Patrik and I wish you to enjoy your interactions with the Tychosium 3D simulator which, we dare say, is already the most realistic (or, if you will, 'true-to-Nature') simulator of our Solar System available. And remember: all of the star systems observed in modern times feature the sort of spirographic / trochoidal orbital patterns traced in the Tychosium. From a purely probabilstic viewpoint, it would be quite irrational to think that our own Solar System (and our Solar System ONLY!) would not feature the beautiful orbital patterns illustrated in the below diagrams (as already described and referenced in Chapter 2):

A detailed "users' manual" for the TYCHOSIUM will be implemented in the upcoming upgrade (early 2023) of the simulator. Meanwhile, here are some basic instructions and tips for beginners:

So far, the Tychosium has attained excellent concordance with all recorded planetary ephemerides, Mars oppositions, the transits of Venus and Mercury across the Sun's disk, Jupiter-Saturn conjunctions, most other periodic interplanetary alignments) and most of all solar and lunar eclipses. A few issues still remain to be addressed (e.g. the secular rate of oscillation of the declinations of our Moon's orbit), yet we are confident that they will be resolved in the upcoming, upgraded version; after all, the Tychosium 3D simulator is - at this moment - the result of the best efforts of only two human brains! 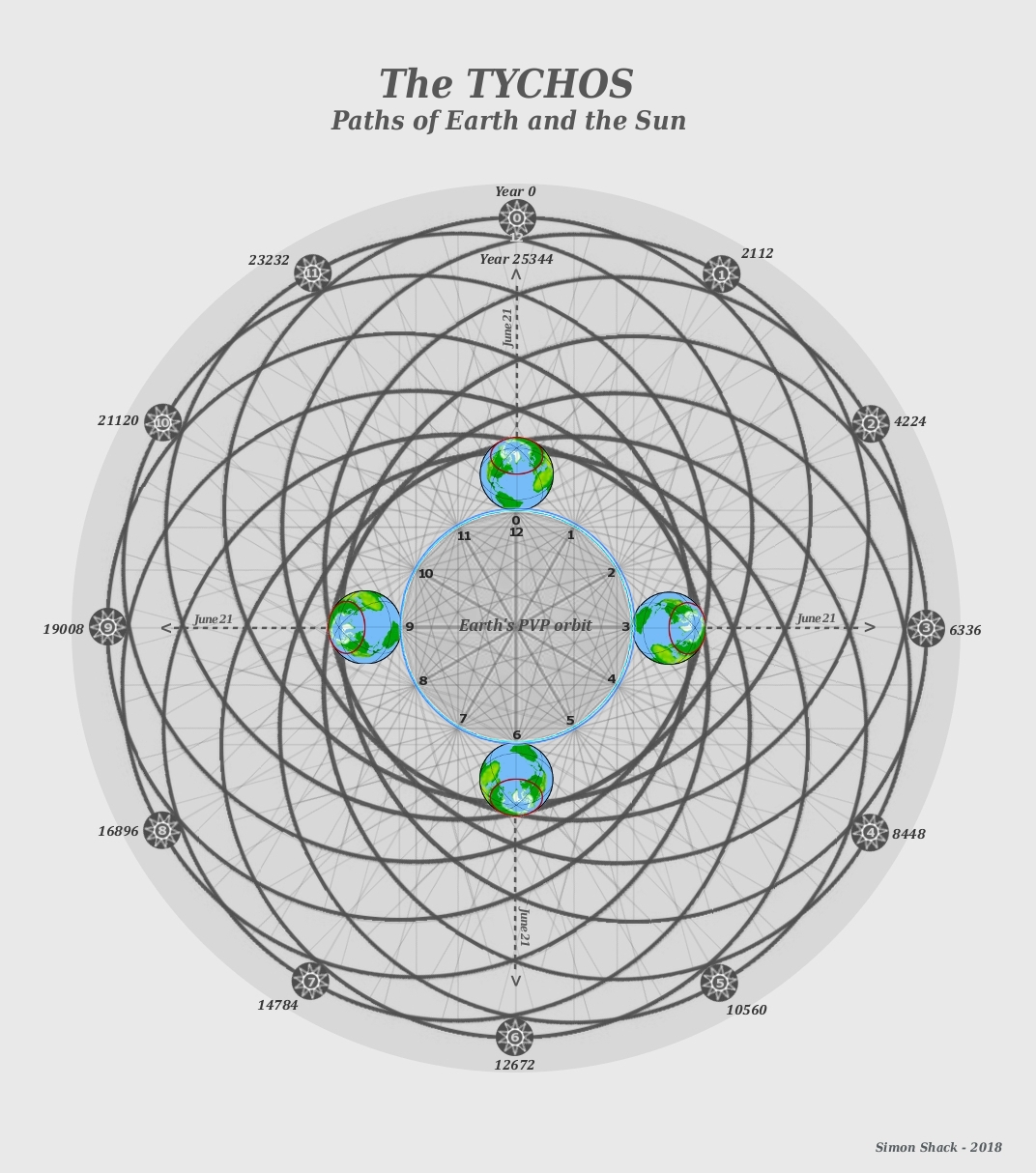 In the next chapter, we shall take a close look at Mars - which Kepler famously stated was the "key to understanding the Solar System". Sure enough, Mars is veritably the 'Master Key' to unlock and unveil the true configuration and mechanics of our system. Ironically though, in spite of his long-lasting efforts (as he laboriously tried to reconcile the Martian motions with his heliocentric creed), Kepler never found that all-important key - so he ultimately resorted to forge it!