Chapter 16: Our Cosmic Clockwork and the “16 factor”

This chapter is, admittedly, fairly speculative. It may however have its merits - and may appeal to horologists - insofar as it goes to highlight what one may call the 'clockwork nature' of our Solar System's workings. Those familiar with the intriguing Antikythera orrery should find it interesting to consider that it may have required (under the TYCHOS paradigm) less gears and cogs than currently believed (or/and hotly debated). To be sure, one of the principal mysteries surrounding the Antikythera mechanism is how so many gears could possibly have been fitted in such a small casing. 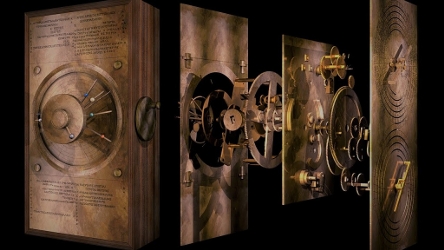 "The Antikythera mechanism is remarkable for the level of miniaturisation and the complexity of its parts, which is comparable to that of fourteenth-century astronomical clocks.(...) There is much debate as to whether the mechanism had indicators for all five of the planets known to the ancient Greeks. No gearing for such a planetary display survives."

Researchers of the Antikythera mechanism may wish to review the TYCHOS system and put to the test the notion that our Moon is the 'central driveshaft' of our Solar System - and that all of orbital planets are integer multiples of the Moon's TMSP. I suggest that Archimedes (or whoever engineered the ingenious Antikythera orrery) may have been aware of these orbital resonances and that the mechanism was perhaps considerably less complex than currently believed - particular with regards to the (unfortunately missing) planetary gearing and display. In any event, it would appear that controversy still rages as to some key aspects of the ancient mechanism. Most notably, it has been suggested in later years that the Antikythera is based on a lunar calendar (of 354 days) - rather than a solar calendar (of 365 days).

In fact, a recent study (2020) published by the British Horological Institute has determined just that:

As it is, I have spent a little time to personally verify this finding - simply by using my image-editing program; all I did was to select and 'copy-paste' a 59-hole section of the Antikythera's all-important (and much-debated) "Fragment C" - as cited in this other extract from the above-linked study:

"In Part 1 of this article, we presented the finding that data we recorded from high resolution computed tomography (CT) images of Fragment C of the Antikythera Mechanism do not support the mechanism having a 365-division front dial calendar ring, and instead the evidence suggests the most likely number of divisions of this feature is 354." 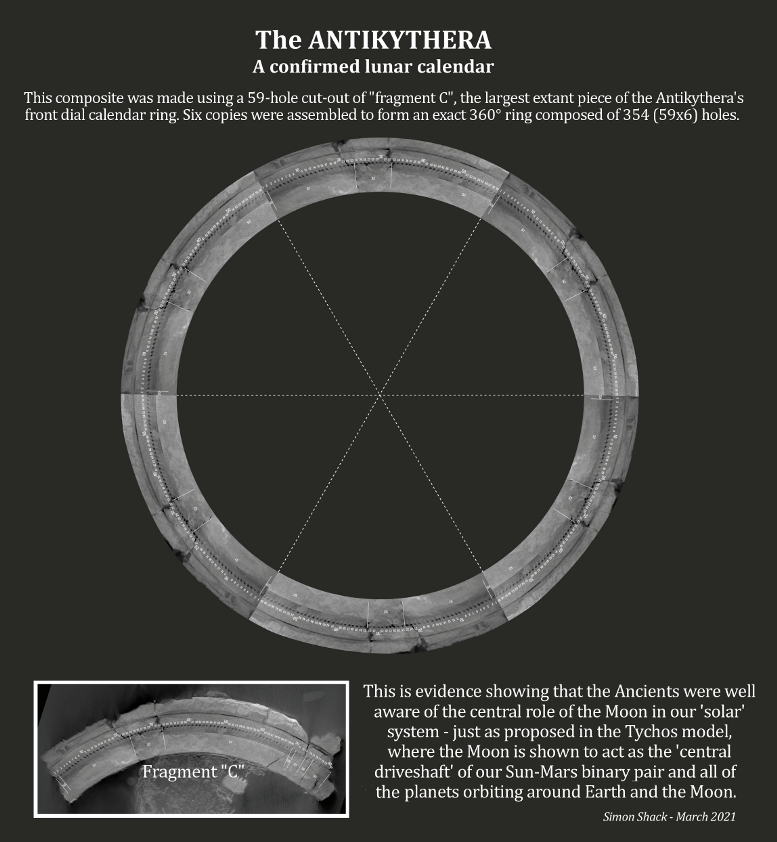 For what it's worth, my above graphic 'reconstruction' of Fragment C does indeed confirm the 354 division-count of the front dial calendar ring, thus supporting the notion that the Antikythera mechanism was based on a lunar calendar rather than a solar one. This is of course of great interest to the TYCHOS model since it proposes that our Moon can be viewed upon as some sort of 'central driveshaft' of our Solar System (as we saw in Chapter 13).

Here's the link to a great video by Chris Ramsay, a co-author of the above-linked study and the builder of a modern replica of the wondrous Antikythera mechanism: The Antikythera Mechanism Episode 10 - Evidence Of A Lunar Calendar

Another 'horological aspect' of our Solar System I find fascinating is how some sort of "16 factor" (or "common denominator") appears to pervade its celestial mechanics. So if you will, let us take a brief look at this "16 factor" that seems to be crying out for our attention.

The below schematic plots the relative revolution periods (over a 16-year time span) of the Sun, Mars, Mercury, Venus and our Moon. Note once more that the orbital periods of our system’s celestial bodies are all near-exact multiples of the Moon’s “True Mean Synodic Period” (The TMSP of 29.22 days). 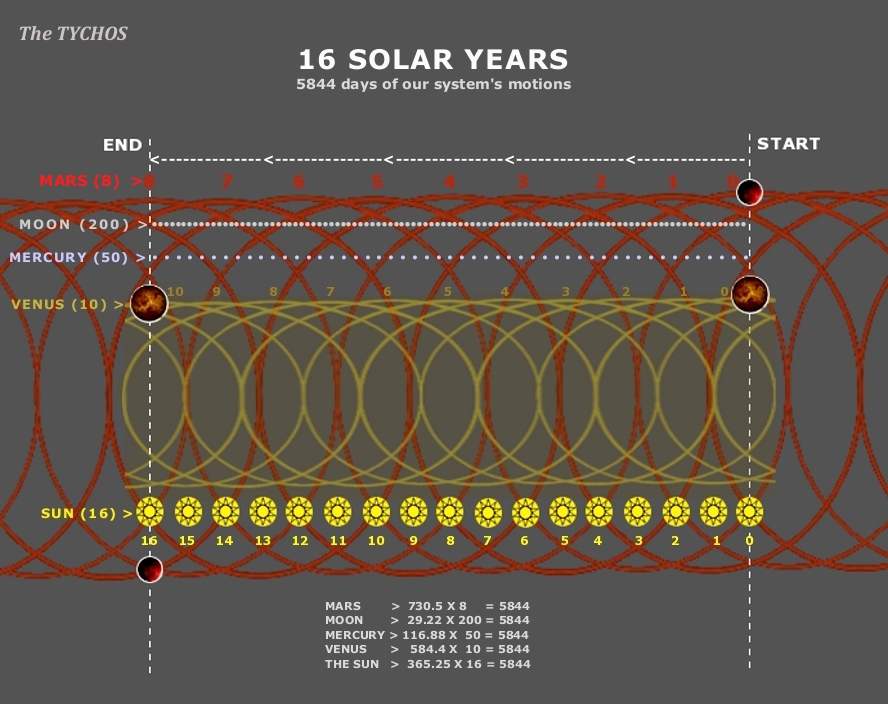 The above diagram is, of course, not showing any actual planetary motions / trajectories; it is only a conceptual way of illustrating the relative orbital ratios of the celestial bodies composing our “cosmic clockwork”.

Here's a shortlist (by no means exhaustive) of diverse occurences of the "16 factor" in our Solar System:

• Mars revolves around our system (from aphelion to perihelion) in about 16 years.

• Venus and Mars regularly re-conjunct every 16 years - on either side of Earth.

• Mercury regularly retrogrades for an average period of 1/16th of a solar year (22.8 days).

• As it completes one Exegilmos cycle, our Moon gains 1/16th of 1440 minutes of RA (our celestial sphere).

Here follows another conceptual graphic of the TYCHOS system I made while musing over the possible “electromagnetic-mechanics” of the same. At this time, I have no pretense to formulate any 'TOE' (Theory Of Everything) to explain the motions of our Universe - yet I hope that the TYCHOS model might encourage open-minded astrophysicists to consider that magnetic (rather than 'gravitational') forces are at play - thus accounting for the wondrous 'clockwork nature' of our system: 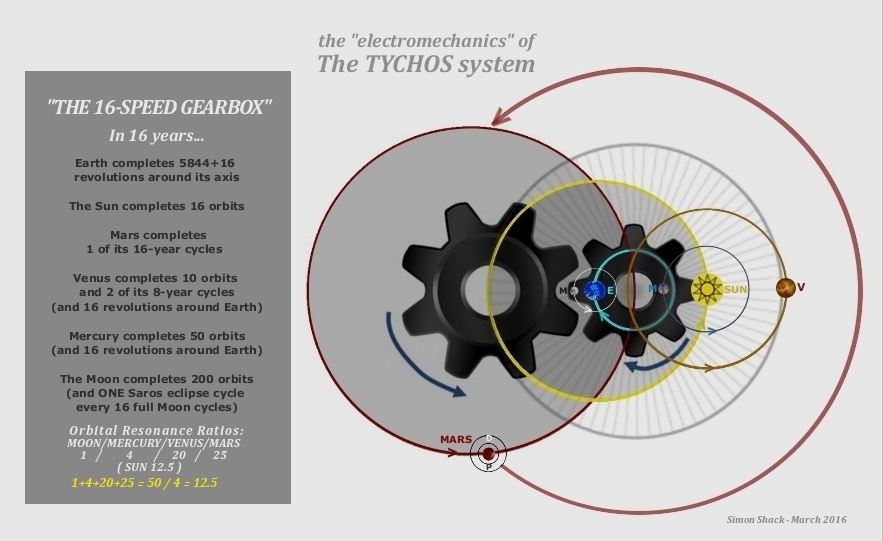 Needless to say, the two cogs (or gears) in my above graphic are merely figurative elements of the diagram: the big cog may represent, if you will, the combined magnetic fields of Sun and Mars exerting a “magnetic counter-torque” on the smaller cog (Earth’s own magnetic field of opposed polarity), thus perhaps being responsible for Earth revolving in the opposed direction of our entire Solar System. In the early days of my TYCHOS research, this 'clockwise' motion of our planet caused me much perplexity - and I feared that it might expose my fledgling TYCHOS model to instant ridicule! At the time, I thought that no such retrograde orbits had ever been observed in our cosmos. In recent decades however, astronomers hunting for Earth-like exoplanets have discovered several orbs nestled within binary systems featuring retrograde orbits – meaning that they revolve in the opposite direction of their host star:

“Astronomers have discovered nine new transiting exoplanets. Surprisingly, six out of a larger sample of 27 were found to be orbiting in the opposite direction to the rotation of their host star — the exact reverse of what is seen in our own solar system. […’]The new results really challenge the conventional wisdom that planets should always orbit in the same direction as their stars spin,’ says Andrew Cameron of the University of St Andrews, who presented the new results at the RAS National Astronomy Meeting (NAM2010) in Glasgow this week.”

These discoveries led the science community to a massive rethink of their models of planetary formation:

“In just two decades, we have gone from knowing one planetary system (our own) to thousands, with 3268 exoplanets now known. This has driven a massive rethink of our models of planetary formation. […] Then came another set of shocking discoveries. Rather than moving in the same plane as their host star’s equator, some Hot Jupiters turned out to have highly tilted orbits. Some even move on retrograde orbits, in the opposite direction to their star’s rotation.”

— Stars with planets on strange orbits: what’s going on? by Brett Addison and Jonti Horner (2016)

Thus, Earth’s retrograde / clockwise orbital motion (as of the TYCHOS) is not overly exceptional, since it has been empirically observed that several other binary systems feature bodies revolving in the opposed orbital direction of their host stars.

Interestingly, this apparently ubiquitous 16 factor extends as far as the very long time scales used in geology. Without going into geological considerations (which is beyond the scope of this book), please know that the peculiar time period of 405000 (+/- 500y) years is being widely used today in geochronology, as it is held to be a particularly steady and significant “geological metronome” of sorts.

“Milankovitch cycles identified in sedimentary successions are being used to formulate an ‘Astronomical Time Scale’ (ATS) for the geologic record, with efforts well underway for the Cenozoic and Mesozoic eras. Back through time, however, ATS resolving power declines due to uncertainties in the orbital solutions and Earth precession model. Prior to 50 Ma, only the modeled 405-kyr orbital eccentricity cycle retains high accuracy, leading to the idea for a ‘405-kyr metronome‘ to define the ATS for all geologic time.”

— A Survey of Paleozoic Cyclostratigraphy presentation by Linda A. Hinnov, George Mason University for The Geological Society of America (GSA) Conference 2017

“Only a few modeled planetary motions are stable enough for use as a metronome, for example, the 405-kyr orbital eccentricity cycle arising from the interaction of the secular frequencies g2-g5. Model stability studies by Laskar et al. (2004) suggest that the uncertainty of the ATS using this term alone will be at most only 0.1% at 100 Ma, and 0.2% at 250 Ma.”

"The 405-kyr period cycle is related to the gravitational interaction of Jupiter and Venus (g2–g5 cycle) and is the prominent and most stable term in the approximation of eccentricity of Earth’s orbital variations on geologic timescales despite chaotic behavior of the Solar System."

In any event, one may find countless papers regarding this 'particularly stable' 405000(+/-500)-year cycle all over the scientific literature.

In other words, the TYCHOS' proposed duration of the Great Year (25344 solar years) would seem to be commensurate with very large geologic timescales. It would therefore be tempting to see if we can find any other commensurate relationships in our cosmos - based on this 405500-year cycle. If you are game, I suggest that we take another brief look at the Sirius binary system which, as expounded in Chapter 6, may plausibly be the "double-double" binary companion of our binary Solar System:

In Chapter 6, we saw that Sirius A and B revolve around each other in 50 (solar) years.

This means that our Sun completes 3.125 X 16 revolutions for every 50-year cycle of the Sirius pair.

However, let's not get carried away by such speculative considerations which, in this case, may well be quite coincidental. In the next chapter, we shall keep our feet firmly anchored on Earth - and see if we can resolve the puzzling (and apparently 'chaotic') behavior of Jupiter and Saturn known to astronomers as "the Great Inequality".