Barnard's star is the fastest-moving star in our skies : as viewed from Earth's Northern Hemisphere, it is observed to briskly "ascend" in our skies, by as much as 10.36" (arcseconds) every year. It is also the second-closest star to Earth (after the Alpha Centauri binary system); due to its speed and vicinity, it is therefore of particular interest when studying the so-called proper motion of the stars (i.e. their gradual displacement in space). As recently as November 2018, it was discovered that Barnard's star also has a companion and is therefore probably also a binary star system. It can be found 'due South' at midnight of the summer solstice (at 17h47m of Right Ascension) and fairly close to our equatorial ecliptic (at 04°41' of Declination). We shall now see how the observed motion of Barnard's star provides further support to the TYCHOS model's tenets and, in particular, to the trochoidal curve - "A Man's Yearly Path" - around which any earthly observer will gyrate annually (see Chapter 21). 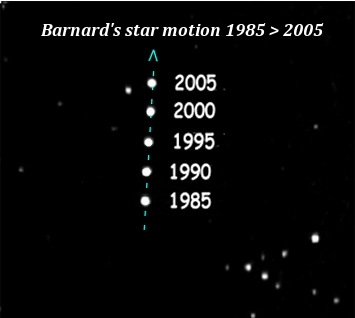 An experienced amateur astronomer, Dennis Di Cicco, is known for having most accurately monitored and photographed this rapidly-moving star for at least 16 months (between 1994 and 1996) and to have plotted this diagram of his extended observations: 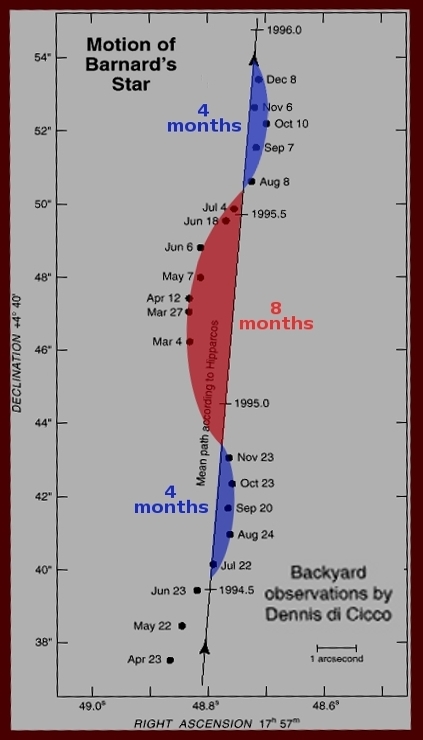 Di Cicco's diagram shows how Barnard's star is observed to swiftly rise in our skies, "south-to-north" (and at a slight east-west angle). As you can see, its path traces an asymmetric curve (which zig-zags "from left-to-right") which I have highlighted in pink and blue - with a distinct 4-month / 8-month frequency. The question is: what could possibly cause this peculiar oscillation? Are we to believe that Barnard's star is, for whatever reason, actually "zig-zagging" in space all by itself as it rises up in our skies - at a regular 4-month / 8-month rate?

Does the Copernican model have any rational explanation for this observed behavior of Barnard's star? Well, no.

Does the TYCHOS have any explanation for this asymmetric east-west oscillating motion of Barnard's star? Well, yes.

Now, you may recall that 3:1 ratio of a "Man's Yearly Path" (as illustrated in Chapter 21). In this case, however, we will be looking at a 2:1 ratio (i.e. 8 months versus 4 months). This, because the Barnard's star does not circle around us (unlike the Sun or the Moon). Therefore, an earthly observer (revolving around his annual trochoidal path) who will, for a full year, patiently monitor a star located close to our equatorial ecliptic (such as Barnard's star) will see it oscillating (eastwards and westwards) at a 2:1 ratio. I do realize that this can be a rather tricky matter to conceive and visualize (within a 2-D environment) - but hopefully my below diagram should help clarify the peculiar perspectives at play:

WHY BARNARD'S STAR "ZIGZAGS" AS OBSERVED 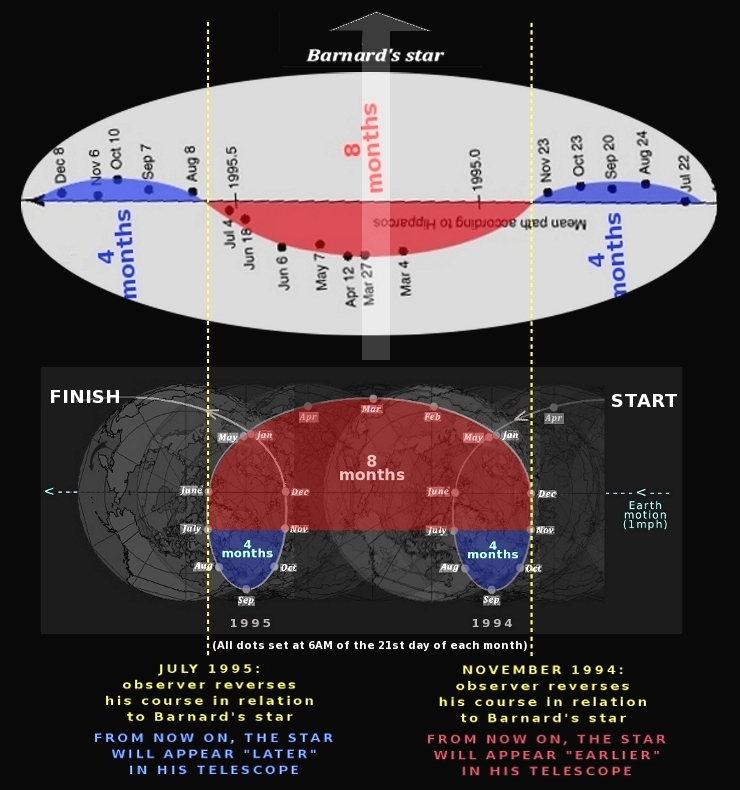 In reality, of course, the Barnard's star does not truly / physically zigzag in such manner as it proceeds in space. Its observed, zigzagging motion is just a natural consequence of the earthly observer's annual, trochoidal path. Our earthly frame of reference (vis-à-vis the stars) is constantly fluctuating back and forth along this trochoidal path. As we saw earlier, this goes to explain a great many "irregularities, inequalities and aberrations" that astronomers, cosmologists and astrophysicists have been endlessly debating - even up to this day. You may for instance recall (from Chapter 17) that it was once thought that Jupiter would inevitably end up crashing into the Sun, while Saturn would be driven away into the depths of space! Thankfully, such apocalyptic 'End-of-Days' scenarios (prognosticated in the early 20th century by our world's foremost astronomers) were entirely spurious: as the TYCHOS model demonstrates - these calamitous predictions were nothing but misconceptions spurred by their erroneous (heliocentric) interpretation of our Solar System.

There really isn't much more to say about the observed motions of Barnard's star - but perhaps this final graphic on the subject will help you envision just how and why Dennis Di Cicco (who deserves a giant hat tip) recorded the peculiar motions of our next-to-nearmost star : 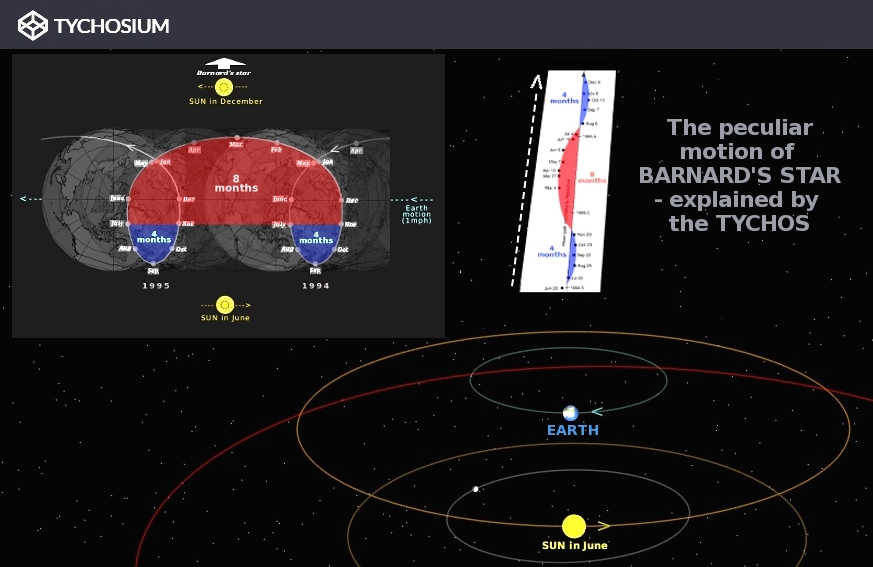 On a philosophical note, it is rather unfortunate how intellectual minds often seem to contemplate some ominous and self-destructive tendencies of Mother Nature - and of the Universe as a whole. This gloomy and alarmist attitude is not, in my heartfelt opinion, conducive to a sane and serene advancement of human knowledge, wisdom and scientific inquiry. I am satisfied that the TYCHOS model may contribute towards a closer, happier and less paranoid relationship with Mother Nature. Let's all stop conjecturing about assorted "chaotic states" of our wondrous cosmos - and start appreciating its predominantly peaceful harmony and stability. Yes, our beloved binary Solar System may well end up exploding into a pyroclastic supernova or dissolving into a nebula - several million years from now. But should we really need to worry about this, today? Having said that, I will now share with you a formidably interesting, brand new study published as recently as mid-2022. As we just saw, the companion of Barnard's star was only discovered as recently (or 'as late') as November 2018, a fact that would certainly go to support the TYCHOS model's contention that ALL STARS - without exception - are locked in binary systems. In Chapter 3, we also saw that science journals were reporting (around 2017) about the "new evidence that all stars are born in pairs". Well, ladies & gents, it now appears that all stars also die in pairs!...

"DYING STARS ARE OBSERVED TO BE BINARY SYSTEMS"

Here follow three selected extracts (to be found at the BBC website) from a scientific study which reports about some very recent astronomical / observational studies (2020-2021) which basically concludes that any given star that we can see 'exploding' in our skies (and turns into what is known as a 'supernova' or a 'planetary nebula') must necessarily have a binary companion. This fresh new theory is now known as the "binary hypothesis...

_"WHAT HAPPENS WHEN A STAR DIES? At the end of their lives, sunlike stars metamorphose into glowing shells of gas –  perhaps shaped by unseen companions. The galaxy is studded with thousands of these jewel-like memorials, known as planetary nebulae. They are the normal end stage for stars that range from half the Sun's mass up to eight times its mass. (More massive stars have a much more violent end, an explosion called a supernova.) Planetary nebulae come in a stunning variety of shapes, as suggested by names like the Southern Crab, the Cat's Eye and the Butterfly. But as beautiful as they are, they have also been a riddle to astronomers. How does a cosmic butterfly emerge from the seemingly featureless, round cocoon of a red giant star?"

"Observations and computer models are now pointing to an explanation that would have seemed outlandish 30 years ago: most red giants have a much smaller companion star hiding in their gravitational embrace. This second star shapes the transformation into a planetary nebula, much as a potter shapes a vessel on a potter's wheel."

"The binary hypothesis accounts very well for the first stage of metamorphosis of a dying star. As the companion pulls dust and gases away from the primary star, they do not immediately get sucked into the companion, but form a swirling disk of material known as an accretion disk in the orbital plane of the companion. That accretion disk is the potter's wheel". (...) "New and innovative telescopes have revealed that some red giants are surrounded by spiral structures and accretion disks before they turn into planetary nebulae – just as expected if there were a second star pulling material off the red giant. In a couple of cases, astronomers may have even spotted the companion star itself."

Source: "WHAT HAPPENS WHEN A STAR DIES?" - by Dana Mackenzie (September 2022)

Note that the above BBC article credits this observational discovery to "new and innovative telescopes" - with no mention whatsoever to any of those supposed, multi-billion-dollar orbiting 'space telescopes'. Their own description of the below image goes: "a mid-infrared image easily distinguishes the dying star at the nebula's centre (red) from its companion star (blue)". Yet, their caption for that same image says: "Nasa's new James Webb Space Telescope has revealed extraordinary details in the Southern Ring Nebula (Credit: Nasa/ESA/CSA/STSCI)" In any event, and regardless whether the below image was captured from a 'space telescope' or - more likely - from a large ground-based observatory, this all adds up to further evidence that ALL the stars in our skies are - in all likelihood - locked in double / or multiple binary systems. 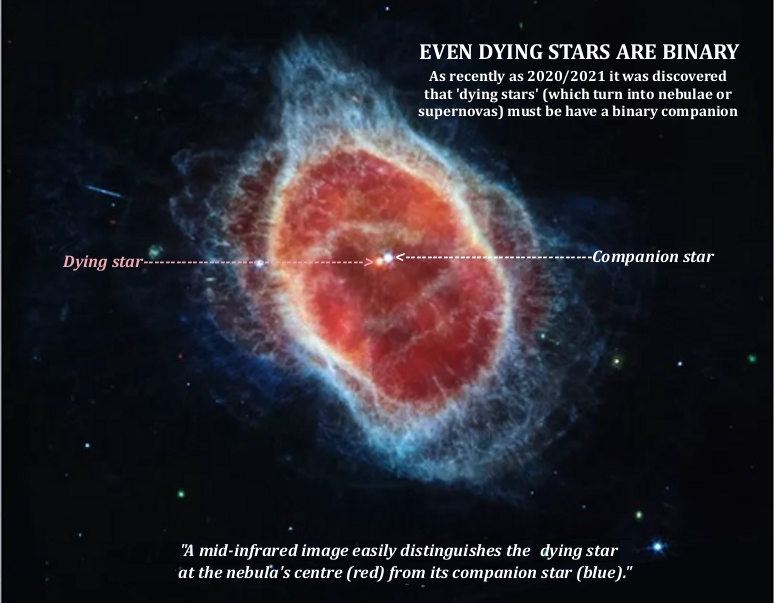 In the next chapter, we shall take a deep and amorous look at the charming Eros asteroid - the very first NEA (Near-Earth Asteroid) to be discovered. I trust that you will all fall in love with the orbital dance that asteroid Eros performs around our planet. An old and famous pop song springs to mind... "love is in the air!"