Chapter 17: “The Great Inequality” - solved by the TYCHOS

Back in the 18th century, the spiny question of the observed behavior of Jupiter and Saturn ignited a humongous and long-lasting debate among our world’s most celebrated astronomers and mathematicians (Halley, Flamsteed, Euler, Lagrange, Laplace and Poincaré, to name just a few). What every astronomy historian will know as “the Great Inequality” is a scientific saga of epic proportions. In short, the problem was that the motions of Jupiter and Saturn did not seem to obey either the Newtonian (gravitational) theory or the Keplerian (elliptical) theory. Not a trivial problem, you may say. Surely, Newton and Kepler couldn’t possibly both be wrong, could they?

What had been observed, first by Kepler himself and later by Halley, was that Jupiter appeared to accelerate while Saturn appeared to decelerate. This was truly ominous news for mankind: it meant, according to the Newtonian 'Laws' of gravity, that Jupiter would inevitably end up crashing into the Sun, while Saturn would be driven away into the depths of space!

As we shall see, the TYCHOS can show that these apparent accelerations and decelerations were completely illusory - and that our Solar System need not fear any imminent, catastrophic fate. But let's see how the eminent Astronomical Journal described this alarming 'discovery of the Great Inequality' - back in 1895: 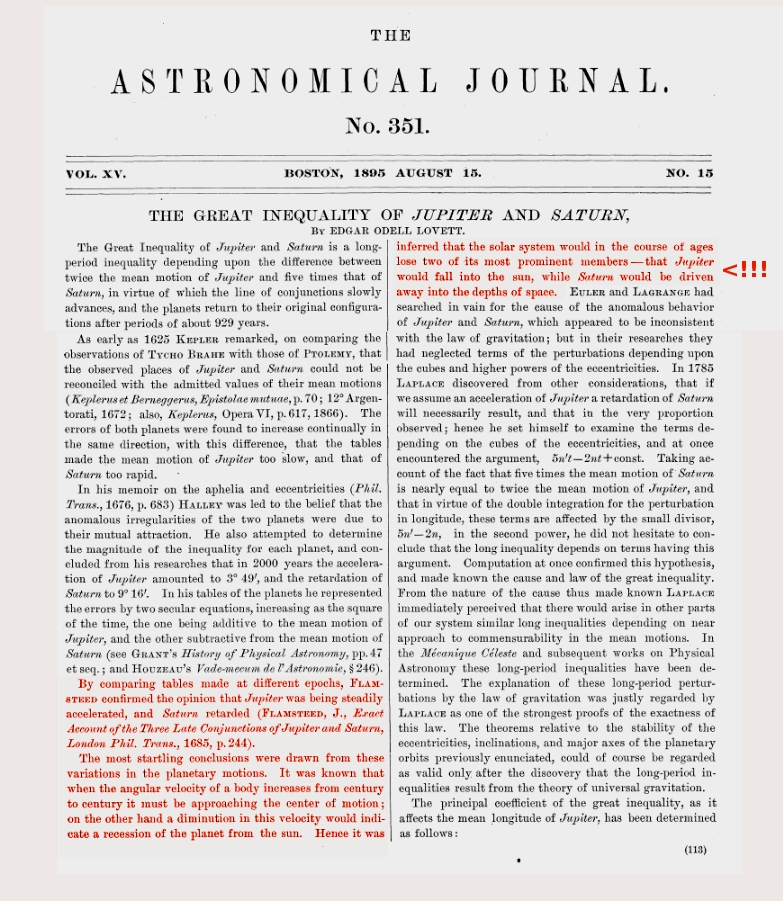 Make no mistake, this was no petty matter: yes, the very stability of our Solar System was at stake! In fact, the Paris and Berlin Academies set up special prizes to encourage scientists to resolve this pesky (and 'potentially apocalyptic') problem. Leonhard Euler, the most acclaimed Swiss mathematician of all times, was the first recipient of such a prize - although his calculations showed both Jupiter and Saturn accelerating, contrary to any empirical astronomical observation ever made!

The magnificent Isaac Newton himself had recognized the problem of the apparent “instability” of our Solar System (on the grounds of the observed behavior of Jupiter and Saturn), but he never tackled the troublesome matter while basically saying (freely paraphrasing his words) that “God should take care of this problem in due time and restore the apparent, chaotic nature of our planetary motions”. Kepler also gave up looking into the matter - and admitted that only future generations may eventually unveil the mystery of our Solar System’s apparent instability (suggested by Jupiter and Saturn’s odd behavior). Kepler, for once, was quite right about that...

Now, what you need to know is that, as seen from Earth, Jupiter and Saturn appear to conjuct at roughly the same celestial longitude about every 60 years or so. Since Jupiter employs 12 years to circle around us, while Saturn employs 30 years to do so, the two will regularly “meet up” every 60 years, i.e. 5 x 12 (=60) and 2 x 30 (=60), respectively. These 60-year conjunctions of Jupiter and Saturn move around our celestial sphere in anti-clockwise manner, as illustrated below: 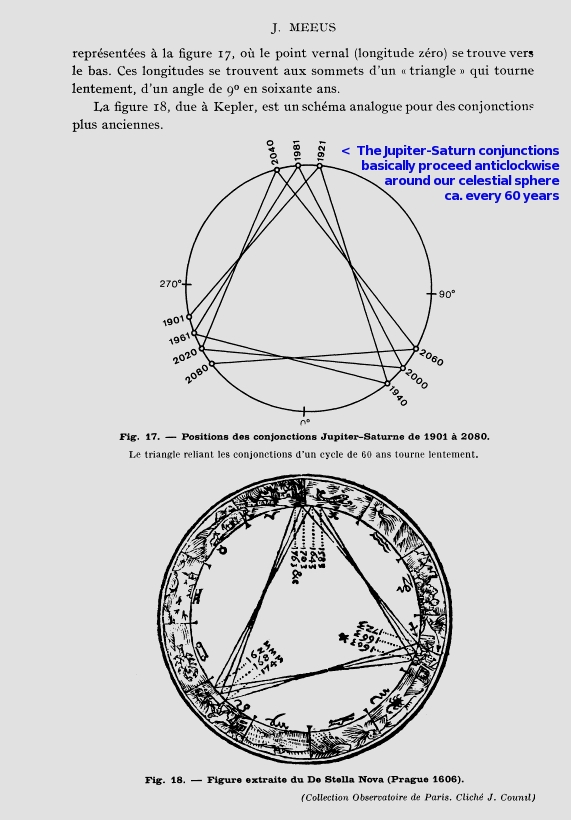 Here's another book extract describing the most worrisome "Great Inequality" that had all of the astronomers of the time on their toes: 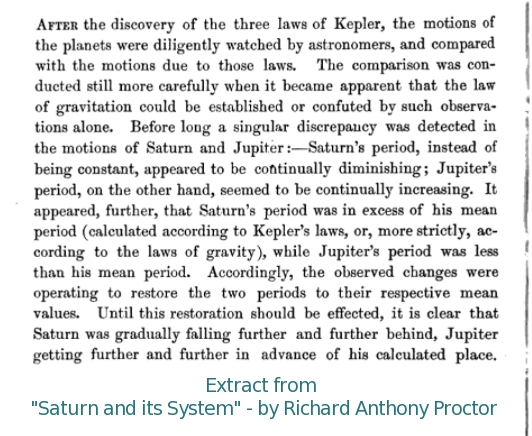 "Saturn and its System" - by Richard Anthony Proctor

Enter Lagrange and Laplace, perhaps the two most acclaimed French mathematicians of all times. The two French science icons engaged in a long struggle to try and resolve the so-called Great Inequality - in order to rescue the sacrosanct Newtonian gravitational laws. Depending on what old text books one may bump into, it was either Lagrange or Laplace who “solved the problem”, basically concluding that (according to their formidably complex equations) the so-called Great Inequality - i.e. the apparently increasing gap between Jupiter’s and Saturn’s celestial longitudes - was only a temporary phenomenon which would eventually reverse course. In other words, the gap would gradually (in the course of about nine hundred years) diminish and cancel out itself. Our two gas giants were not, after all, going to bring Armageddon upon us.... Phew!

However, it is unclear just how Lagrange and Laplace reached their “mathemagical” conclusions. In academic text books, we may find some dreadfully abstruse computations based on assumptions of how “gravitational perturbations” and “tidal friction effects” might cause those puzzling inequalities. As it is, under the Copernican model’s configuration there is no plausible explanation as to why Jupiter’s and Saturn’s celestial longitudes would oscillate back and forth, as observed. In time though - and to their great relief - Lagrange and Laplace were eventually “proven right”: the apparent, relative accelerations and decelerations of Jupiter and Saturn were then observed, several decades later, to have reversed course:

“In 1773, Lambert used advanced perturbation techniques to produce new tables of Jupiter and Saturn. The result was surprising. From the mid-17th century the Great Anomaly appeared to go backwards: Saturn was accelerating and Jupiter was slowing down! Of course, such behavior was not compatible with a genuinely secular inequality.”

One of the greatest observational astronomers of the times, William Herschel, had also investigated the apparent “back and forth” oscillations of Jupiter and Saturn: “Herschel describes Saturn’s period as increasing (i.e. Saturn seemed to be slowing down) during the seventeenth century - and Jupiter’s period as diminishing (i.e. Jupiter seemed to be speeding up) and he adds – ‘In the eighteenth century a process precisely the reverse seemed to be going on.”

Thankfully then, there was no end-of-world scenario whatsoever for humanity to fear. Nonetheless, as pointed out by a number of contemporary independent researchers, the “Great Inequality” and its corollary, the very “Stability of our Solar System”, both remain - to this very day - unsolved riddles. For instance, here’s what Antonio Giorgilli (a veteran Italian expert in this peculiar area of astronomical studies and the author of “The Stability of the Solar System: Three Centuries of Mathematics”) warns the reader with:

“Su queste basi cercherò di illustrare che significato si possa dare alla domanda: 'il sistema solare è stabile?' Quanto alla risposta, non vorrei deludere nessuno, ma sarà: non lo sappiamo”. Which translates as: "On this basis I will try to illustrate what meaning can be given to the question: 'is the solar system stable?' As for the answer, I do not want to disappoint anyone, but it will be: we do not know".

"We do not know"... Well, we obviously cannot attain any firm knowledge of our Solar System’s behavior - so long as we haven’t even determined its correct geometric layout, can we? Now that we have looked at some historical controversies surrounding the "mysterious variations" of the motions of Jupiter and Saturn, let’s see how the TYCHOS model can resolve the “Great Inequality” riddle (without appealing to any “gravitational perturbations” or “non-gravitational effects”). My below graphic should readily elucidate just what causes this 'phenomenon'. Again, it is quite simply Earth's slow displacement around its PVP orbit that creates the optical illusion of Jupiter and Saturn alternately accelerating or decelerating. In reality, the two of them only ever move at constant / invariable speeds - just like all their 'family members' in the Solar System: 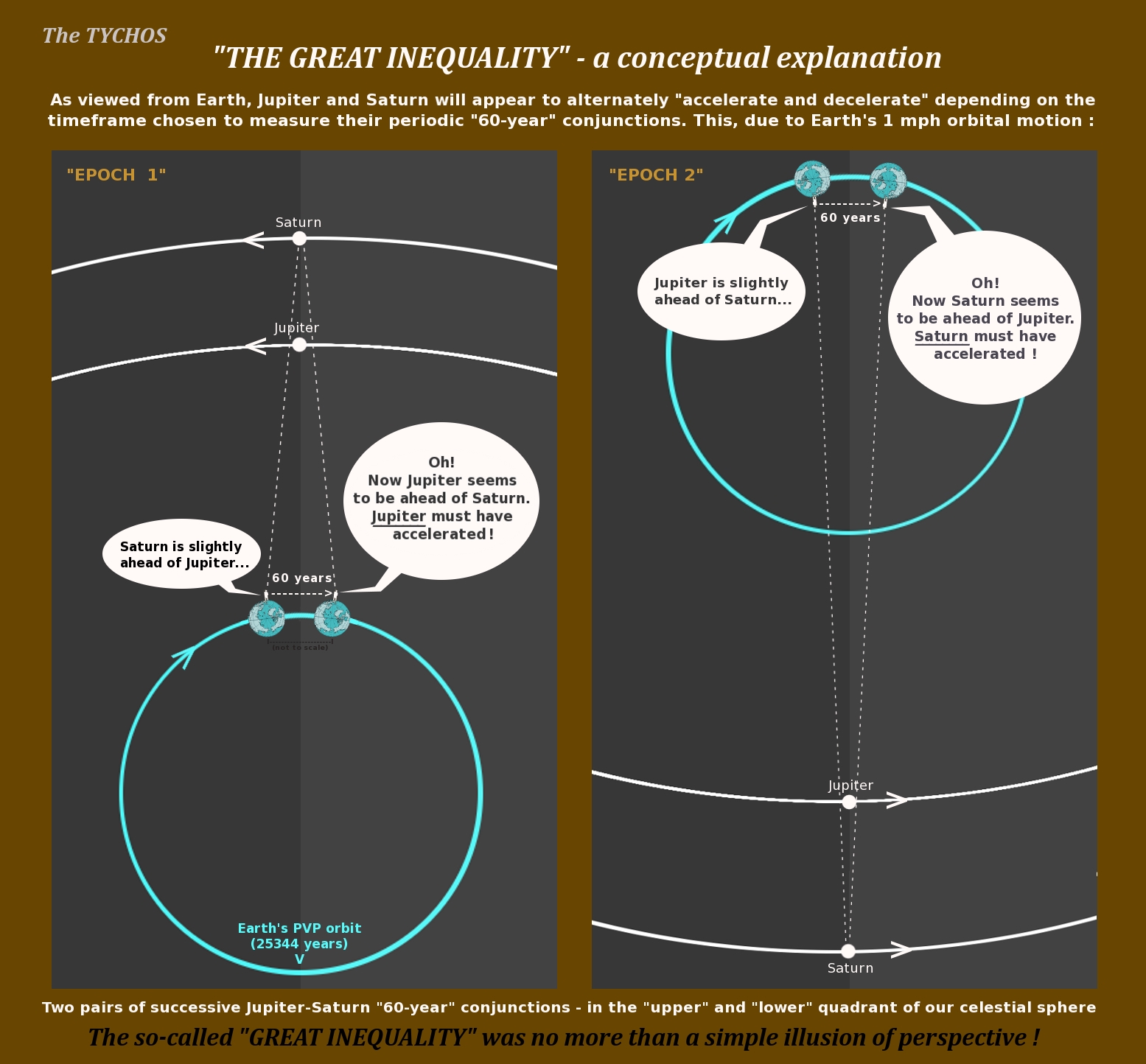 1: Whenever (in a certain epoch) Jupiter and Saturn are observed, over a 60-year interval, to conjunct in the “upper quadrant” of our celestial sphere, it will seem as if Jupiter is accelerating.

2: Whenever (in a certain epoch) Jupiter and Saturn are observed, over a 60-year interval, to conjunct in the “lower quadrant” of our celestial sphere, it will seem as if Saturn is accelerating.

This is because, as Earth moves slowly (at 1 mph) around its PVP orbit, Jupiter and Saturn will alternately conjunct as they proceed in the opposite or in the same direction as Earth.

Antonio Giorgilli then points out something of paramount interest to the Tychos model’s paradigm. Here’s another quote from his aforementioned paper (“The Stability of the Solar System: Three Centuries of Mathematics”):

“The first long-term simulations have been carried out since the end of the 1980s by some researchers, including A. Milani, M. Carpino, A. Nobili, GJ Sussman, J. Wisdom, J. Laskar. Their conclusions can be summarized as follows: the four major planets (Jupiter, Saturn, Uranus and Neptune) seem to move quite regularly even over a period of a few billion years, which is the estimated age of our Solar System. On the other hand, the internal planets (Mercury, Venus, Earth and Mars) present small random orbital variations, in particular of their eccentricity, which cannot be interpreted as periodic movements: we must admit that there is a chaotic component. Not that the orbits change much, at least not in the short term, but there may be, for example, small variations in the eccentricity of the Earth’s orbit that have very significant effects on the climate: the glaciations appear to be correlated with these variations.”

In other words, this nicely goes to confirm that, as proposed by the TYCHOS, there are two distinct groups of celestial bodies in our Solar System:

And thus, the Tychos model resolves yet another historical impasse of astronomy: “The Great Inequality". Jupiter and Saturn both travel at stable, constant speeds and will not be crashing into the Sun or migrate to other galaxies. So relax, folks: the End of the World is not near!

All in all, it may well be geometrically correct to affirm that the true orbital periods of Jupiter and Saturn are respectively 12 years and 30 years.

Did you know that Saturn can return facing the same star in only 252 days? This is an observable fact. Now, make yourself a nice cup of tea - and give it a good thought. As you let this fact sink in, you should then rightfully ask yourself this good question: "if Earth revolves around the Sun in about 365 days, how can it possibly reconjunct with Saturn and the same star in only 252 days?"

My below graphic shows two screenshots from the heliocentric Star Atlas simulator. We see that Saturn indeed returned facing the same star in the Aquarius constellation on the following dates: 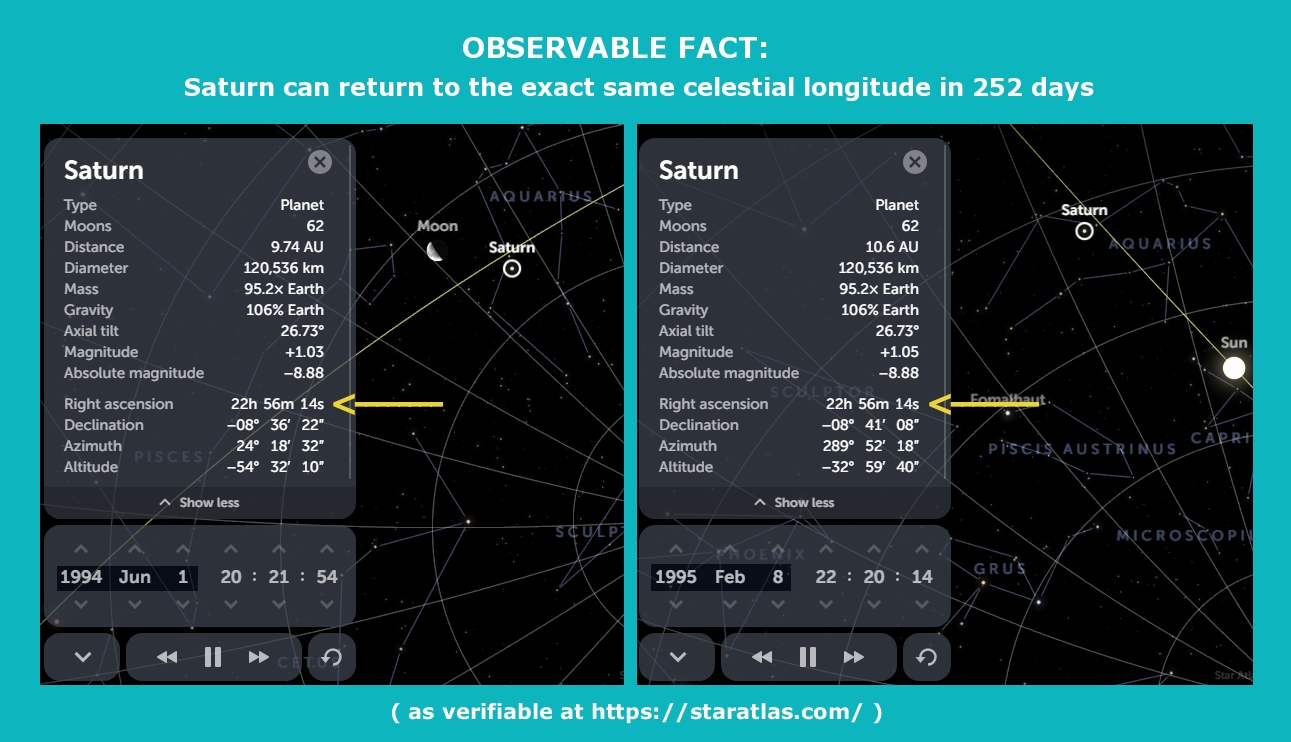 The below screenshot is from the JS orrery (a heliocentric simulator), depicting the same two dates. One must wonder how these two parallel lines could possibly point to the very same point in the Aquarius constellation: 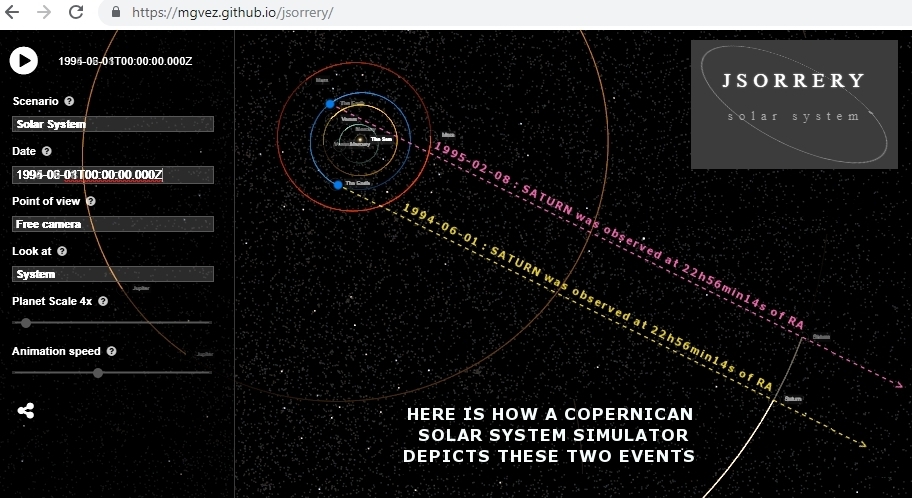 On the other hand, here is how the Tychosium 3D simulator depicts the same two conjunctions. As you can see, the Tychosium shows Saturn returning to the very same line of sight (having completed its retrograde loop) - and will thus naturally return facing the same point in the Aquarius constellation: 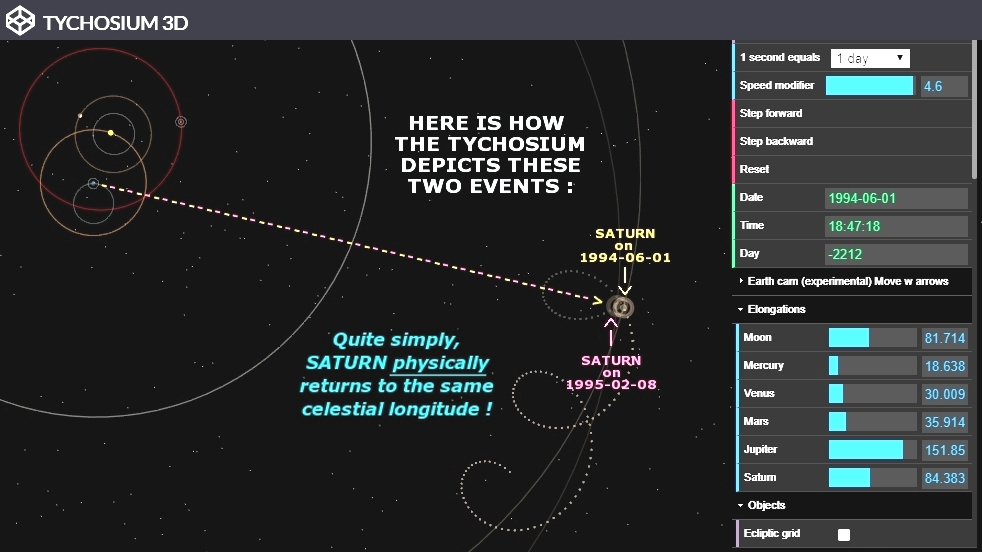 I will leave it up to the readers to judge for themselves which of the two simulators (the JS orrery or the Tychosium) provides the most sensible explanation for the observed behavior of Saturn - as it returns to the same point in our skies within a 252-day period. May no one ever accuse this author of trying to impose upon the readers his own world view. All I wish is to share it with other rational thinkers - so as to start a thoughtful and intelligent debate as to which configuration of our Solar System best agrees with what we can observe in our skies.